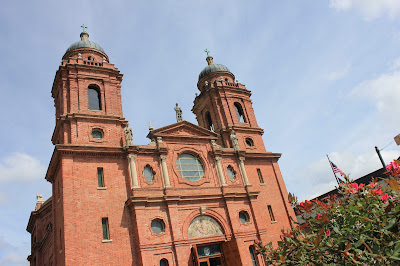 On this weekend trip, our objective was to one, leave Augusta and two, explore.  Little did I know what this mountain city held in store for me!  I was thoroughly impressed by the largest private home on the Biltmore Estate, but to also stand underneath the largest freestanding elliptical dome in North America was a welcomed bonus!  Reading up on the basilica, I learned that this was the last building to be designed by Raphael Guastavino, Sr.  Some of his notable works include the Grand Central Station of New York City, the Great Hall of Ellis Island, and hundreds of others.  Finished by his son of the same name in 1909, the senior Guastavino remains forever in the crypts below this Spanish Renaissance masterpiece in the heart of Asheville as his final resting place.

Passing through the doors, I entered into the massive interior of the dome under it's span of 58 by 82 feet, adorned with stained glass windows, Italian-made statues of Christian Saints, and handcarved wooden ornaments and reliefs.