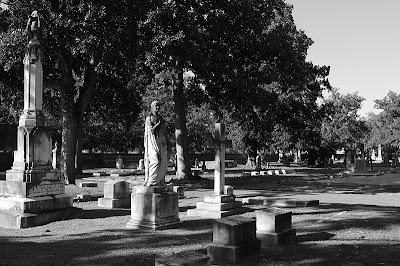 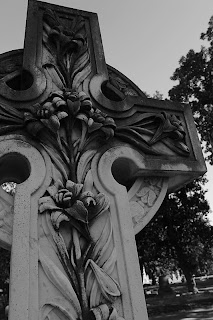 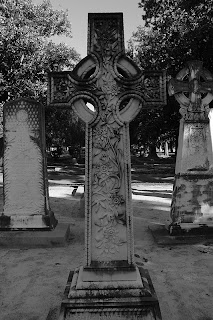 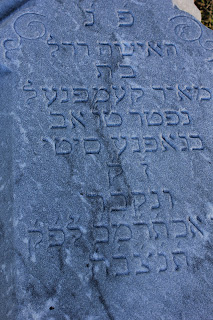 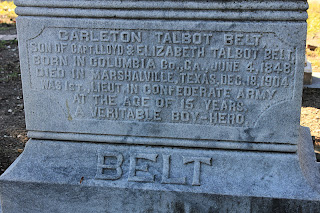 Ok, With more than two years of military service under my belt, I got a good eyebrow raise at the fact that young LIEUTENANT Belt not only was a part of the Confederate Army, but held a position of authority!
Posted by t_mork at 12:43 PM No comments: 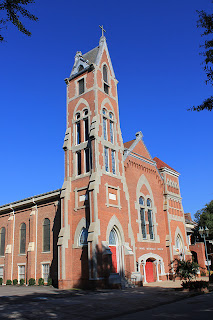 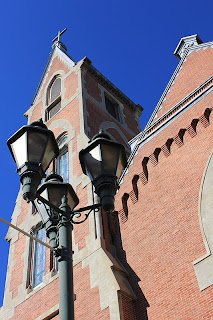 St. James was named after the founder, Reverend James Evans, and built due to the growing congregation of the former St. John Methodist church which was just down the way on Greene Street.  This is one of the first churches that I noticed within the downtown area due to its location.  The church is tucked in at the edge of one of the main roadways to the Heart of Augusta. 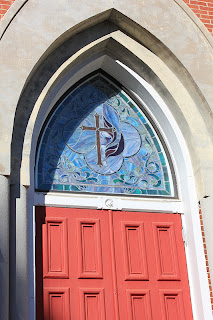 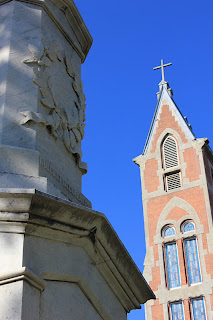 The original two story structure was built in 1856 out of local fired brick for a total construction cost of about $9,700.  Later in 1886, the belfry was add and the church building was expanded to further suit the growing church community.
Historical Note: President Eisenhower worshipped at St James in 1954 during his Presidency.
Posted by t_mork at 12:25 PM No comments: 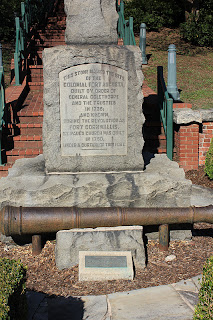 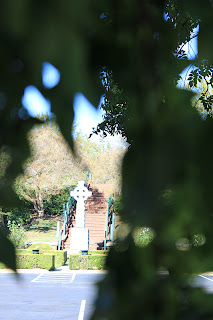 A view at the cross with the banks of the Savannah River holding back the waters.
Posted by t_mork at 12:14 PM No comments:

Regarded as the oldest established building claimed to Augusta would be St. Paul's Church.  The first of four churches built on this plot was the gothic church completed and founded by the Church of England in 1750.  Located on what once was Fort Augusta just off the banks of the Savannah River, the first church was burned during the Revolutionary War.  Continuing further on about that era, a notable site to visit within the shadow of the bell tower is the grave site of Colonel William Few, one of the signers of the Constitution of the United States.
﻿﻿﻿

The only relic of the first church that remains is the baptismal font which was shipped over from England in 1751.

The church that stands today was built after the Great Fire of Augusta in 1916 and is a close replica of the 1820 version of the church, only larger to fit the needs of the growing population of the River City. 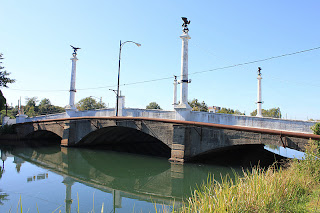 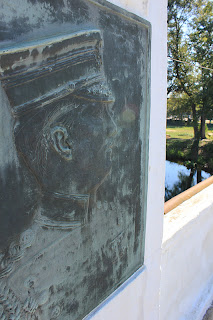 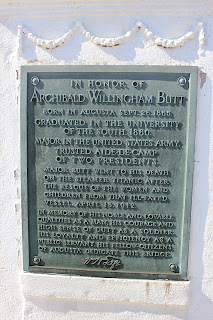 Starting in the 1960's, the Augusta officials contemplated draining the canal in order to build a superhighway, which would have led to the one and only memorial to the Titanic in the State of Georgia and a tribute to one of it's prominent citizens.  Although, with involvement of locals, the canal later became part of the historical district, but the old stone bridge suffered from neglect.  Without any available government funding, the local people took fundraising into their own hands and in the years 1994 and 1995 held summer concerts with the every so catchy title of "Butt Jam" and adopted the slogan "Save Our Butt".
Posted by t_mork at 11:56 PM No comments: 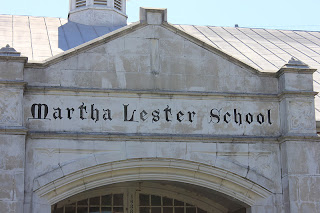 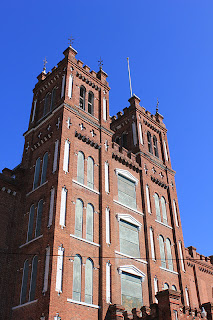 Chosen for it's prime central location and being the crossroads of the Savannah River and multiple railroads, Augusta was claimed home to one of the most notable structures, The Confederate Powderworks.  The Powderworks, consisting of 28 buildings, was the only completed permanent building project funded by the Confederate States.  At the time of it's completion, it was the second largest powder mill in the world and had the ability to produce more than enough gun powder to the Confederate cause, about 7,000 pounds per day!

As the last standing monument to the original Powderworks, the chimney tower now known as Obelisk Chimney, has been dedicated to one of it's founders, Colonel Rains.  It is the first and oldest Confederate Monument in the city of Augusta.

As the canal was being expanded after the American Civil War, tearing down some of the 28 original buildings of the Powderworks was in plan.  In 1880, the Sibley Mill Company purchased the remaining buildings and used bricks from the former buildings and built on top of a few of the previous structures.  Using the hydropower that Powderworks utilized, the Sibley Mill became one of the world's highest producers of textiles for companies such as Levi Strauss.  Despite the mill being closed down in 2006, the City of Augusta still uses the water turbines to produce electricity to this day under the control of Georgia Power.  Cresting the top of this neo-gothic edifice which was atypical for structures intended for the purpose of textile milling is the coat of arms of the Sibley family:
Esse quam videri
To Be, rather than Just Seem. 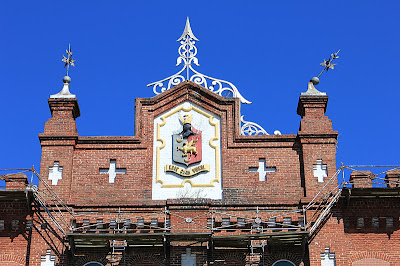 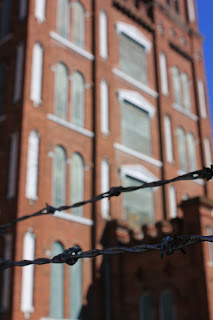 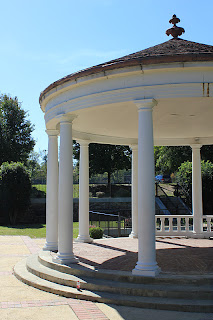 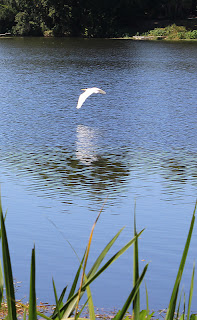 Life on the Canal - Augusta, Georgia

I have another bit of odd information that I learned from a railroad history buff.  The railroad crossing sign, or the more technical term 'crossbuck', was one of the first standard traffic signs of the world.  Mainly due to the fact at the time of their creation no form of transportation really interfered with another: Boats, Horse and Cart, and Walking.  The crossbuck is placed at level-crossings, a part of the railway built up to allow traffic across more easily.  The crossbuck reaches the height of 9 feet whereas the standard height of other traffic signs is only 7 feet.  The reasoning behind that is it facilitates seeing the sign from the back of a horse.  Learn something new everyday! 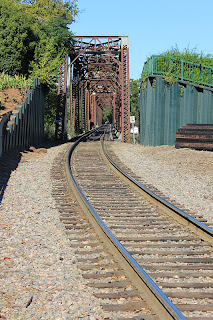 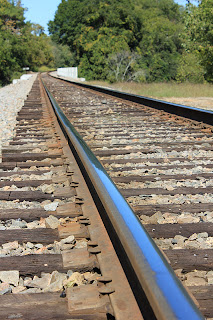 The Railway: The Artery of the American Dream.  Winding along their paths for miles on end, the railway bore supplies, livestock, and settlers out to the Unknown of the American West.  It may be a possibility, from the point which I took this shot, a steam driven train may have came from behind me headed west bound... 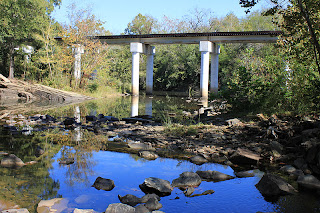 A benefit to the railroad system is the ability to transport large amounts of cargo at high speeds, but the downfall is building the track to carry that cargo has to be somewhat level.  With the expansion of the railways, bridges have spanned gorges and go under mountains across the world. 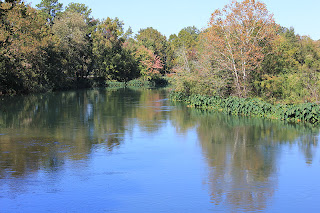 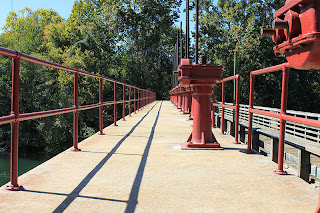 The Augusta Canal symbolizes the artery to the heart of the city.  Built to provide power and energy to one of the most noted industrial cities of the South, water to the flourishing city, and transportation to many over the river-goers of the 19th century.  Engineered to connect two parts of the Savannah River and to utilize the fall line which is just north of the city as a source of power.  With embracing the new age form of energy, the modern world of industry boomed in textiles due to the cotton and iron works such as Lombard Iron Works which made the shafts and mounts for this levee. 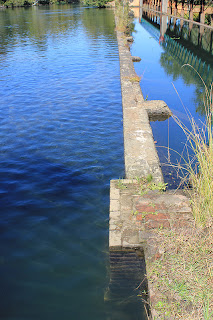 Although the Augusta Canal supplies the citizens with water and gave way for barges to move inward to the mills, this canal is the only on in the world that is used for what it was built to do: Power the Mills.

Discovering treasures depends upon the person.  For some it might be that Mother-lode of gold, others a cherry red 1969 Camaro, but to me it is learning the History.  What happened here and better yet, why here?