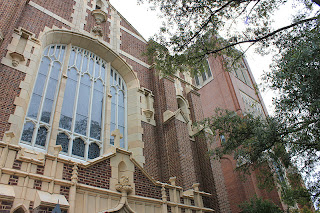 Nicknamed the Phoenix, St. Luke's rose out of the ashes as the Civil War raged on around it.  In the year of 1863, the congregation gathered under the historic physician and clergyman, Charles Quintard.  Born into a medical family in New England, Quintard moved to Athens, Georgia, in 1848 in pursuit to run his own medical practice.  Shortly afterward, he then again moved to Memphis, Tennessee, to teach Medicine and it was at this time he transitioned from the field of Medicine to becoming a man of the Church.  When the Civil War broke out, volunteers of Tennessee begged Quintard to serve as a Chaplain for the Confederate Army despite his original pro-Union values and he also served as a field surgeon during the War.

The fundamental style of the church is late English Gothic, the church ties in various other styles in small bits that add a tasteful addition to the character of the church.
The stained glass to the church has a very intriguing history. One of the church's service workers told me that depending on the main color of the glass signifies where it was created. The three places that the windows came from were Germany, England, and the United States, and one of the altar windows is from a chapelin England brought over during World War II! 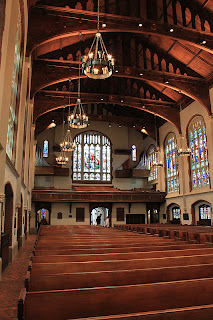 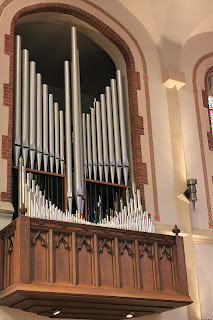 The Big 32.    The music master of the St. Luke's is the Alston Memorial organ built by Austin Organs and installed in 1963.  A tid bit on Austin Organs, started by John Austin, who was the engineer behind the air chest system that changed the way the modern pipe organ is built to this day!