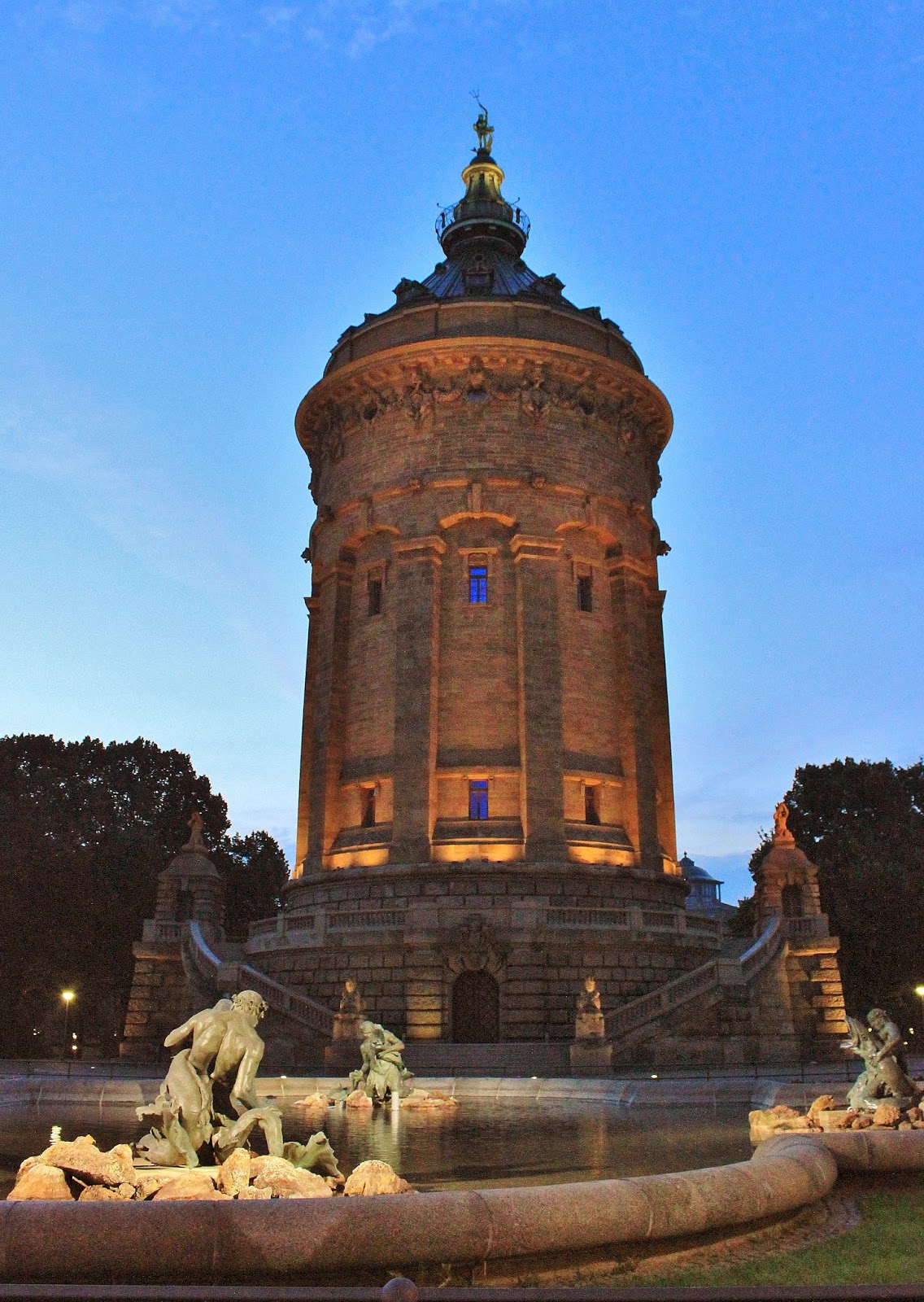 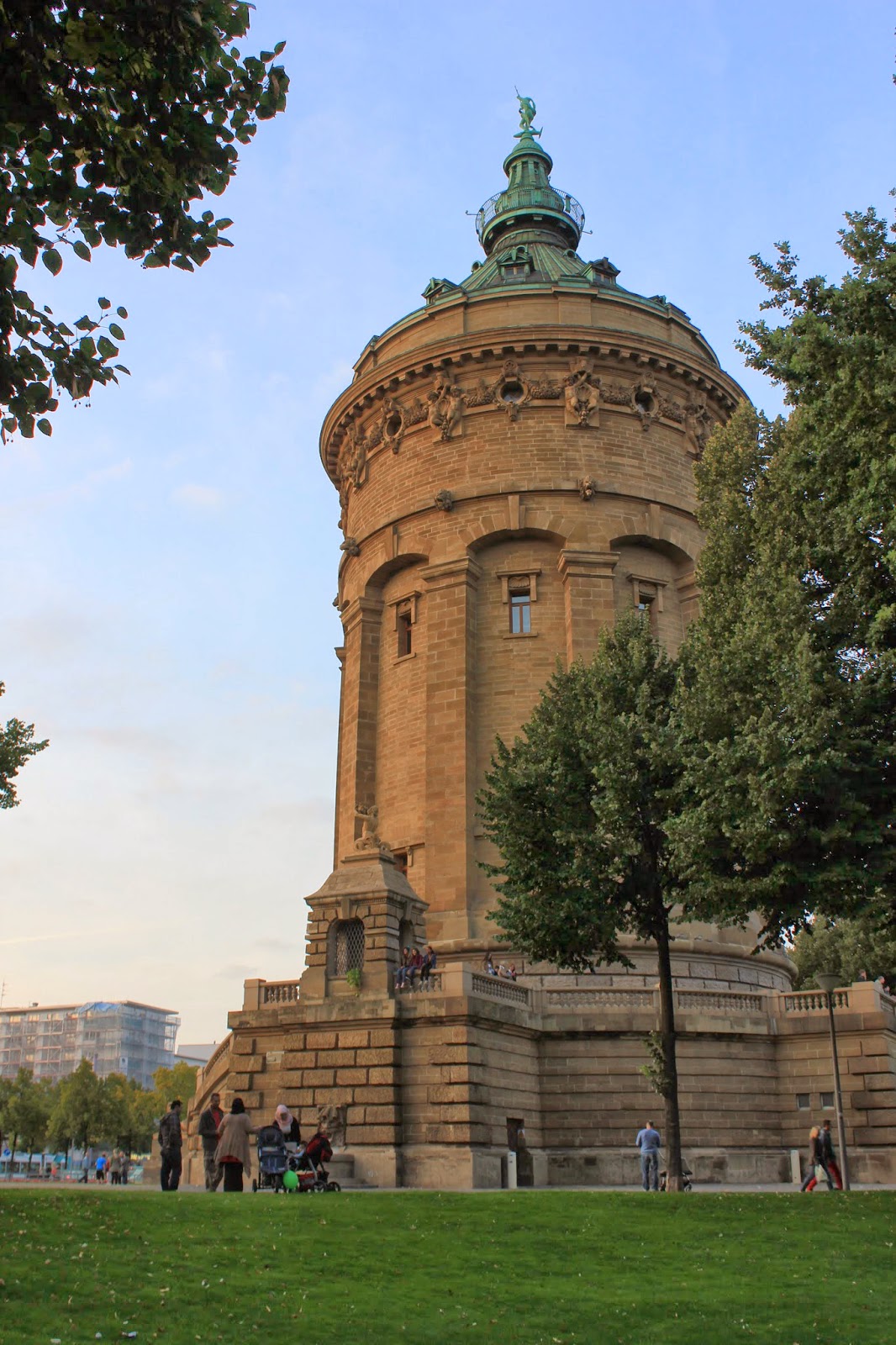 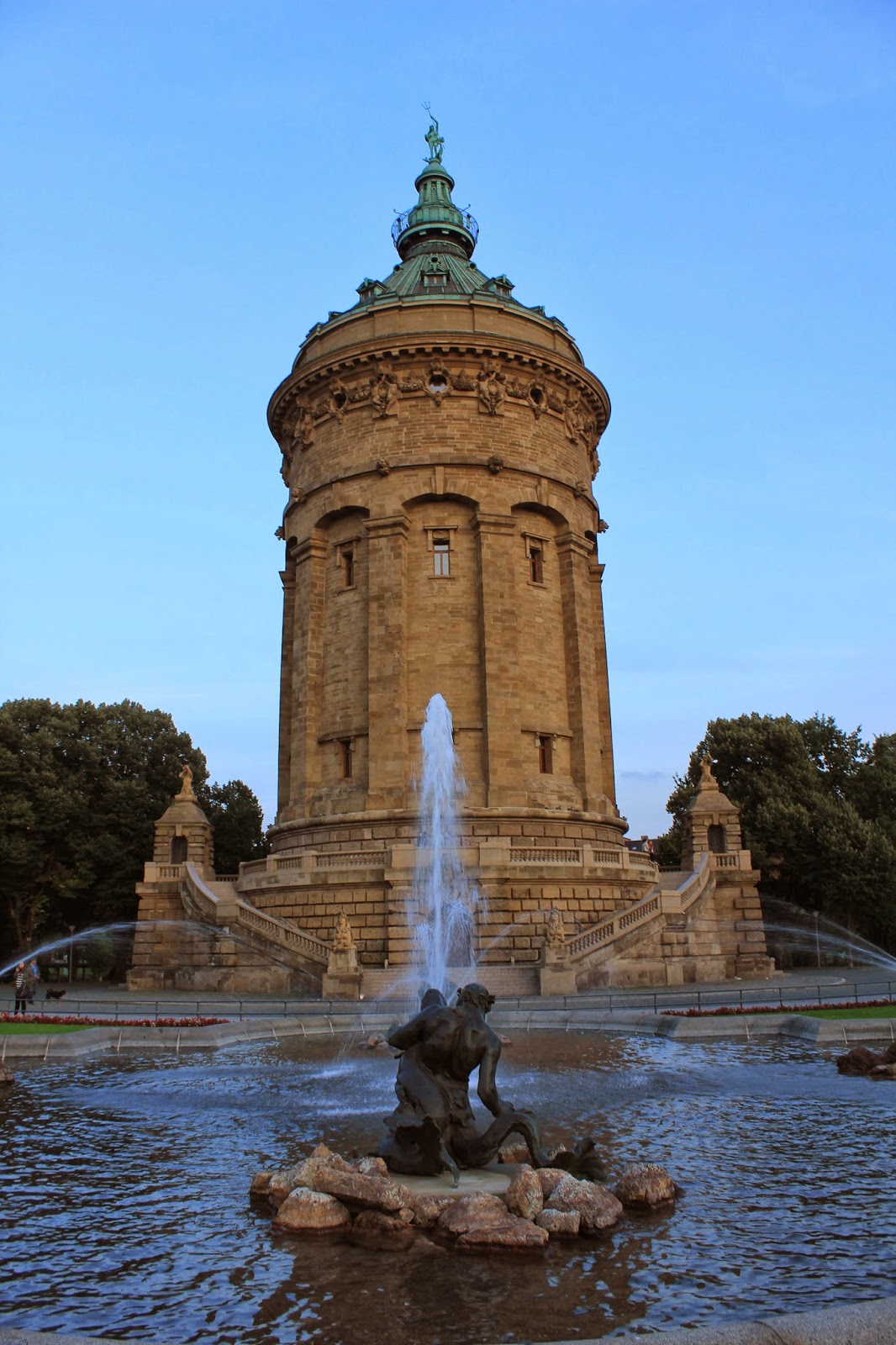 Marking the gateway from Oststadt into the Quadrate of Mannheim is the late 19th century Romanesque water tower rising about 200 feet above the well manicured gardens and extensive water fountains of Friedrichsplatz.

I was able to experience my first Deutsche Bahn train ride through the Rheinland countryside after departing in the early afternoon from Kaiserslautern with Mannheim as my Point B.  I was quite pleased with this train ride due to the cleanliness and organization of the trains, but more so by the fact that you can drink beer - ALL DAY.  The United States has some catching up to do in this public transportation aspect!  Passing through Ludwigshafen, I immediately knew there was a few good miles of biped exploring ahead of me for the evening.  As those thoughts were rushing through my head the view opened up even more as the train passed over the Rhein.  At that point, I was able to check off the first must see of Germany!  Stepping out of the Hauptbahnhof, the next item on the list was der Wasserturm and as soon as I started straight out the doors I was surprised by the fact of how big the tower really was and I was still quite a distance!  Most definitely the "center of attention" for the quadrant city, the grounds were host to hundreds of families with children playing frisbee or fußball, soccer for my American audience, in the shadow of this magnificent structure.  In the middle picture above,  please note the three girls sitting on the railing at the bottom for a size comparison!
Posted by t_mork at 10:45 PM No comments: 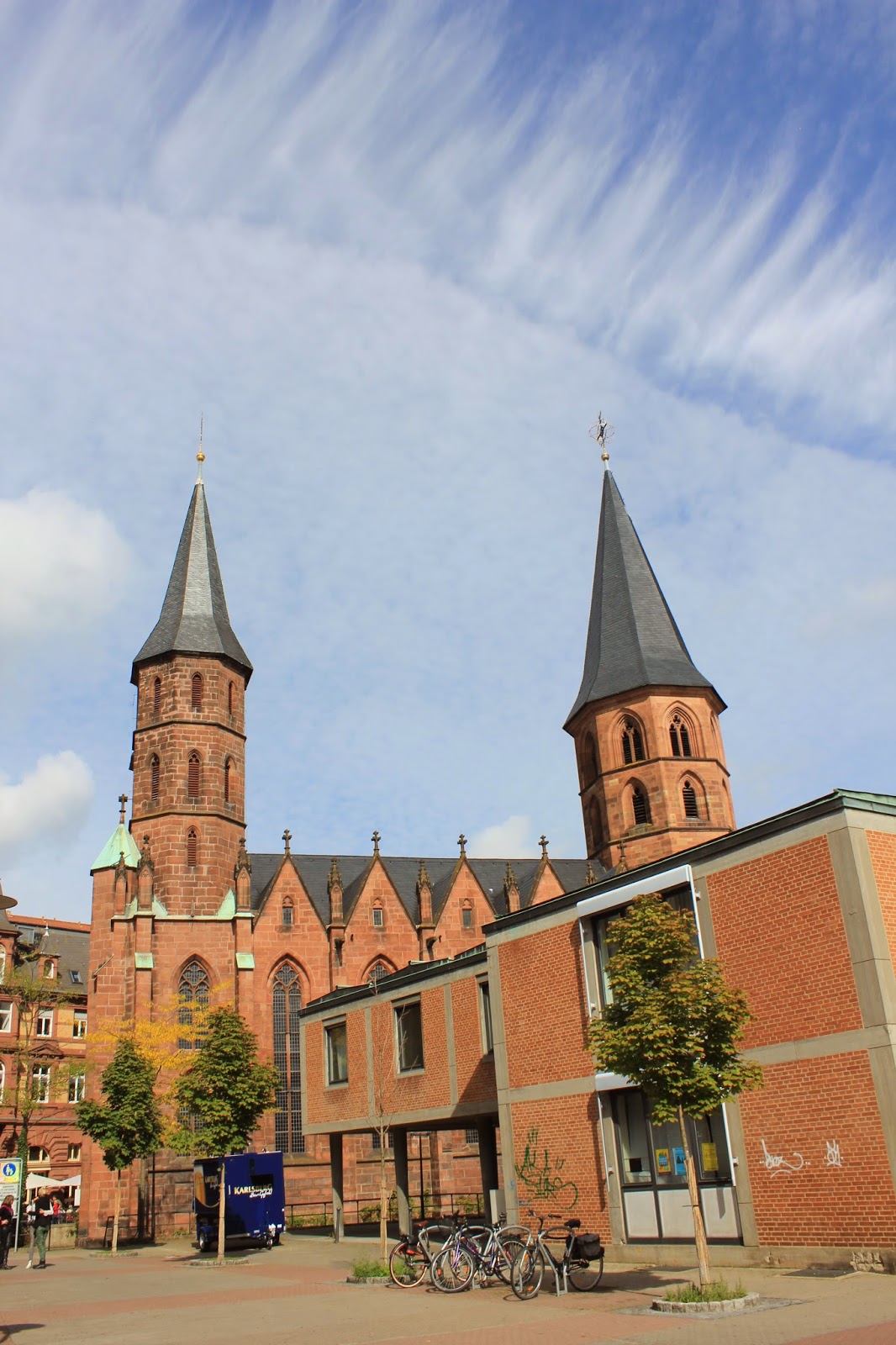 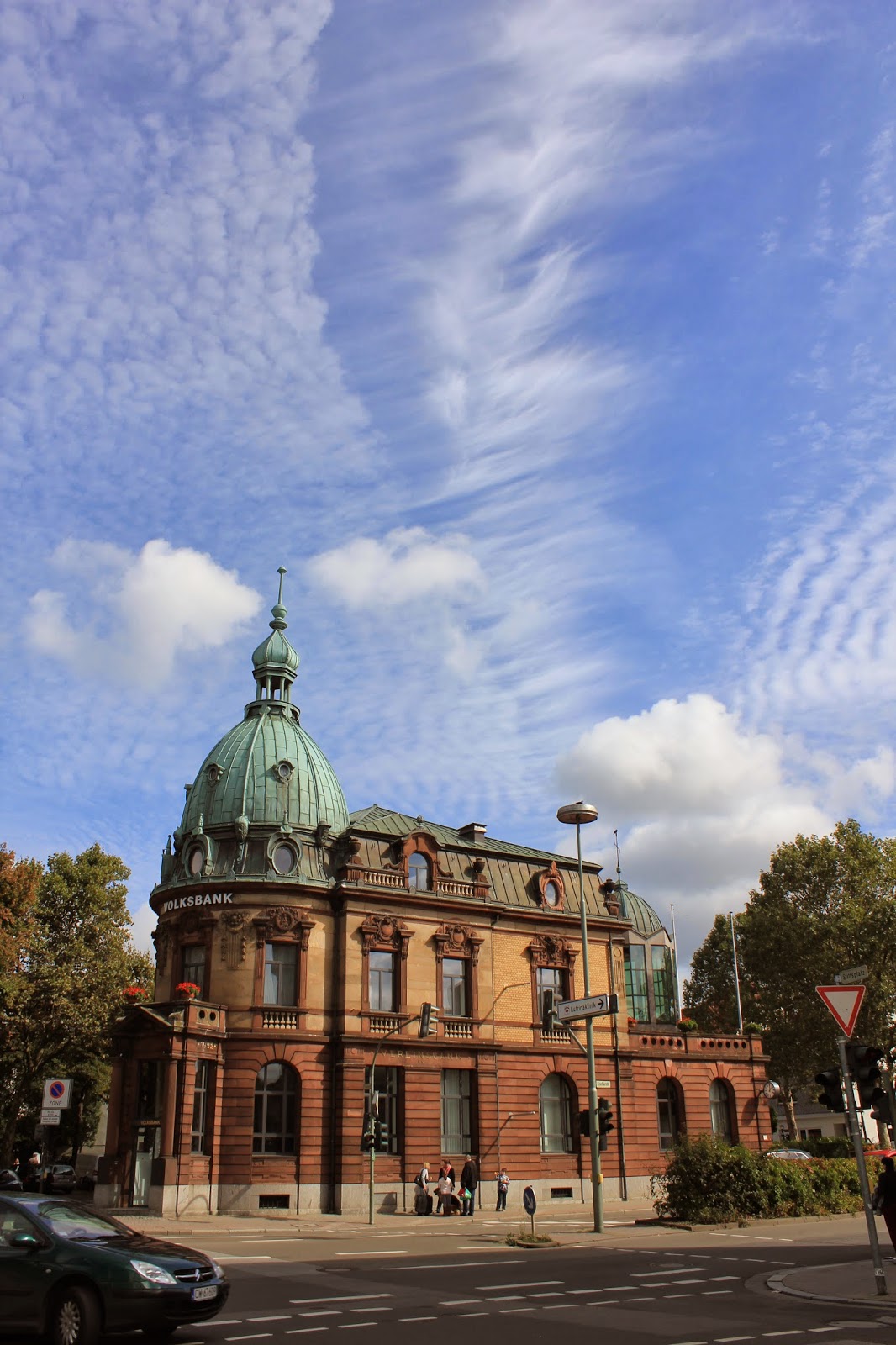 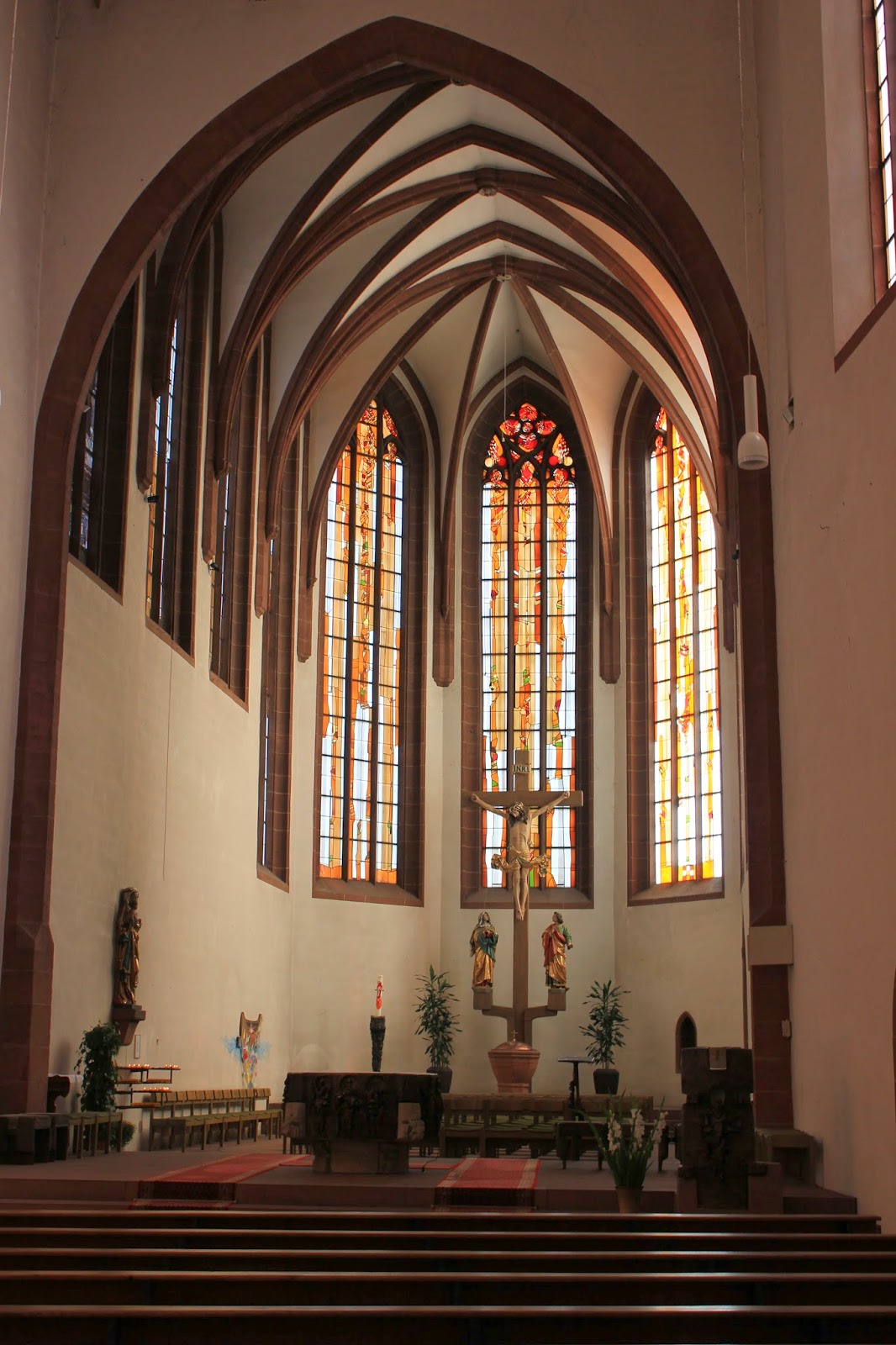 Upon arriving to Germany the night before at Ramstein Air Force Base, Kaiserslautern was my first authentic German experience of my trip!  After leaving the base in the morning, my taxi driver was telling me about the area and how it has grown from a small rural town established in the 9th Century into a large international cultural center.  I was eased into Germany from my American ways being Kaiserslautern is the largest concentration of Americans outside her territories! 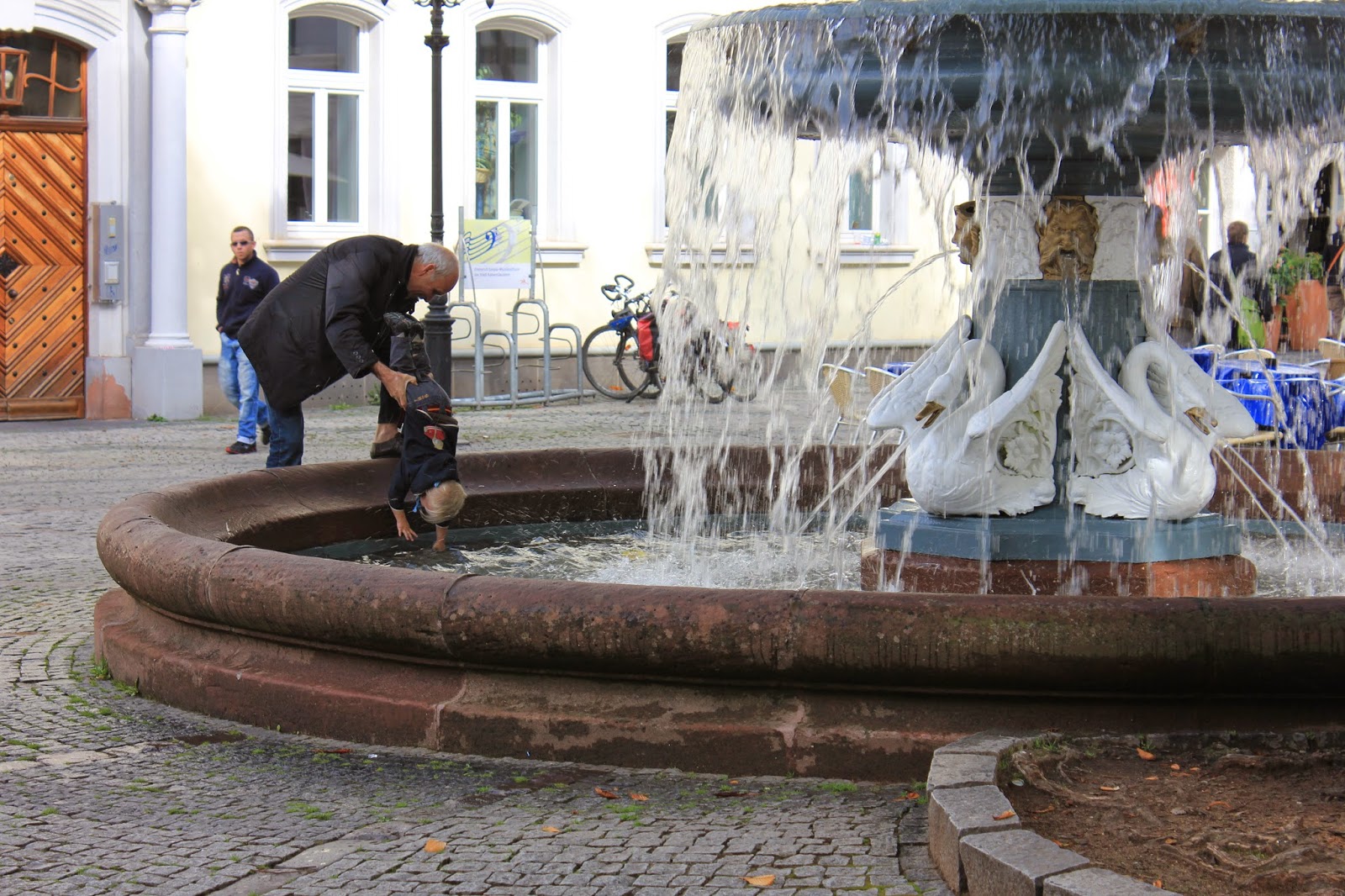 With my hiking pack upon my back, I began my explorations about the city from the plaza of the main train station, or Hauptbahnhof auf Deutsch.  Heading north along Richard Wagner Straße, I made my way down hill to the city center and with each step find more reasons to get "lost".   One of my first entertaining experiences was stumbling upon the crowded Stiftsplatz with vendors, farmers and to my surprise florists! Considering it was the end of September and when I had checked the weather for the upcoming weeks, I was prepared for more autumn weather.  I could have not been more wrong!  By ten that morning it was already pushing 75 degrees Fahrenheit and I had a full pack and leather jacket to contend with, but I was enjoying the sapphire blue skies!  Standing guard over the square are the towers of Stiftskirche, pictured above on the left, however I did not make it into the church, I found myself in one of the oldest and most historic places remaining in Kaiserslautern: Martinskirche.  Founded as a Franciscan monastery in 1290, the now Catholic church, pictured above on the right, has had a wide array of denominations congregate under the plastered vaults and also many uses between service as a church, such as an armory during the Reformation.  Outside in the plaza, I snapped a peculiar event of the young boy being tipped into the water fountain, most likely to cool off!  But why use the water fountain when there are ice cream shops every hundred feet in the main square! 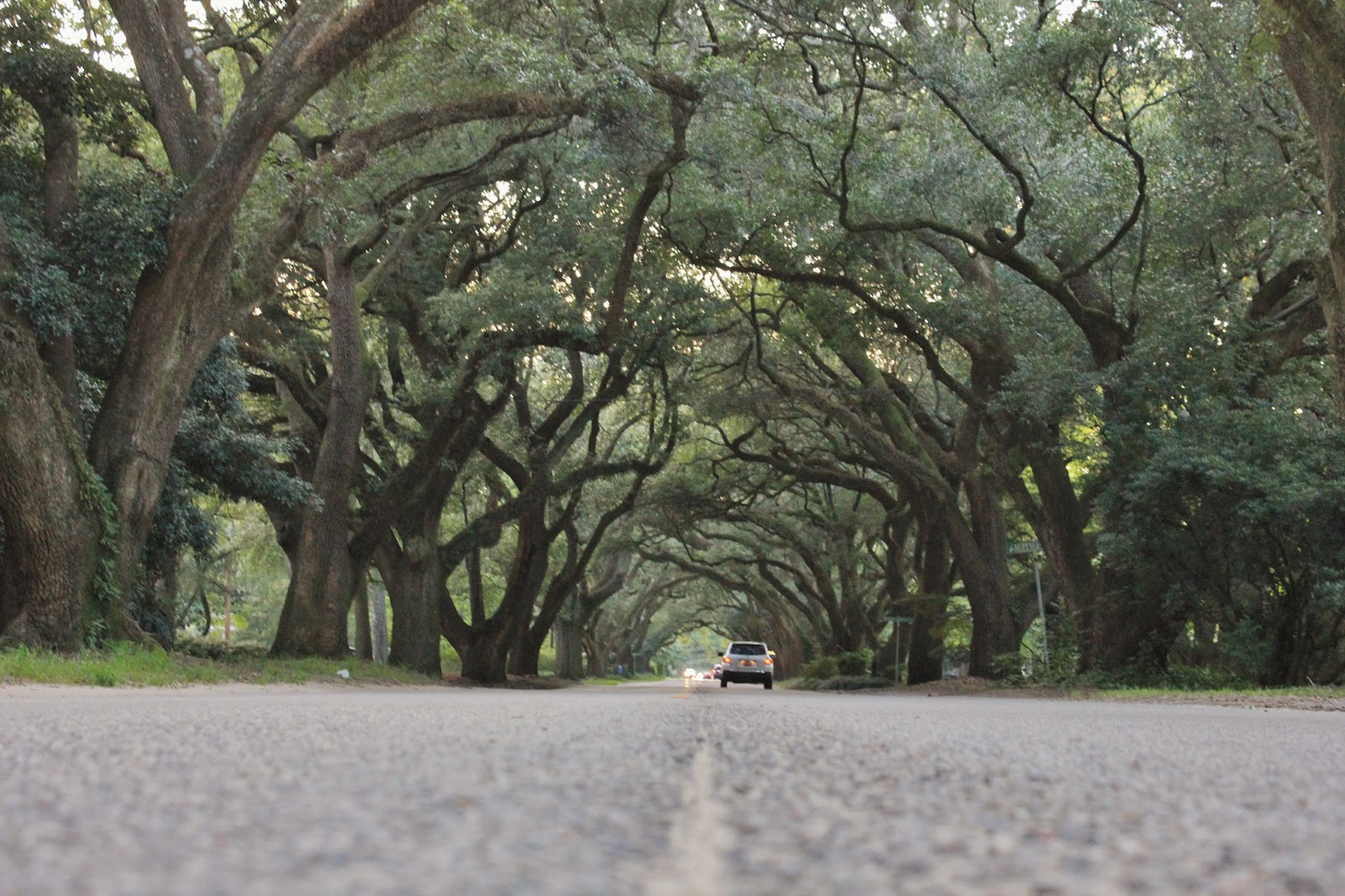 On the edge of the historic downtown of Aiken runs a tunnel of entangled white oaks known as South Boundary Avenue.  Some of these gentle giants are estimated to be more than one hundred years old.  I had taken this photo last fall and sadly many of these titanic beings' boughs were brought down from an ice storm that struck the area the following winter.  Although, as the wonder of nature, the trees survived this tumultuous trial and will continue to grow despite their scars from Mother Nature's wrath.

If you do ever find yourself driving along the wide boulevard streets in downtown Aiken, I recommend you turn southward and drive under the reaches of these majestic trees and follow the path the protect into the endless paddocks of South Carolina's horse country.
Posted by t_mork at 9:55 PM 1 comment: