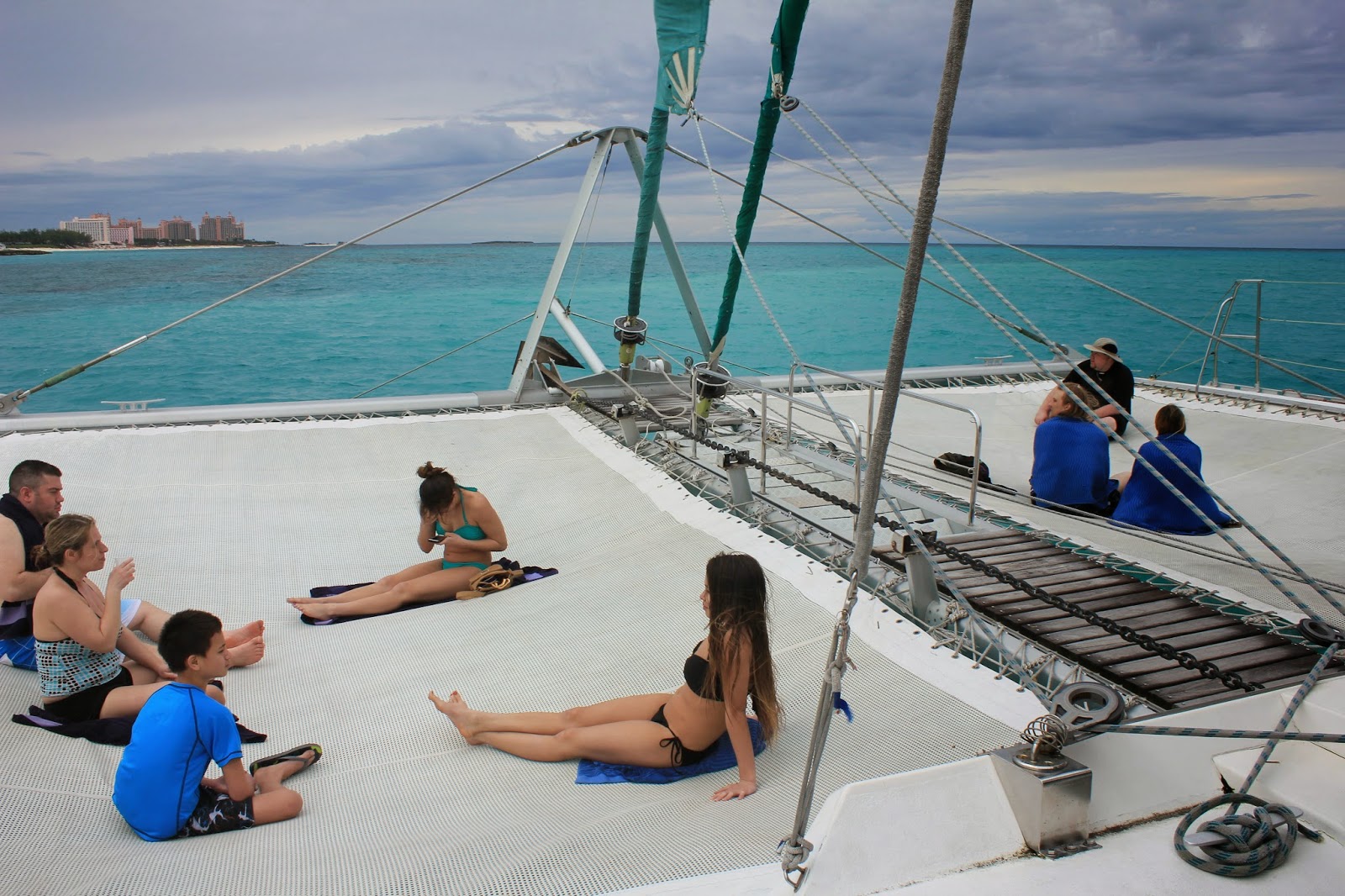 After exploring the Bahamian capital city in the morning, we set out from the pier on what potentially looked to be a rainy day to the outer islands on an 80 foot catamaran.  Bending around the eastern point of Paradise Island, the Nassau Harbor Lighthouse served as our pivot point to the surrounding islands.  As we passed over the bright blue waters, the weather made a change in our favor by warming up and the sea smoothed out before us as we pushed westward to Athol Island.  When the Captain of the catamaran started to edge back the throttle, my heart started to race more knowing we were getting closer and as I peered over the rails, I could see the reefs below!  With the anchor set, it was time to get in the water and, as the saying goes minus the death part, we swam with the fishes!  As my first snorkeling experience in the Caribbean, when I submerged my body into the crystal clear waters, I traveled out of one world into another filled with new creatures of endless shimmering colors and infinite shapes and sizes all moving about in this world in a beautiful frenzy of fish.  Rising back to the surface after exploring the sea-world was a bit disheartening, however, on the ride back to the port we all enjoyed a few glasses of "island punch"... and the rum ran strong in the mix!

After making the trek from Augusta, Georgia, the afternoon before with my father across the Low Country, we arrived to Chucktown to explore before embarking on our cruise!  This not being my first time to Charleston, I had a few sites that I wanted to check off the list that I kept on missing and the one at the top for this trip was the Old Exchange and Provost.  The building itself is older than the United States, for it was built between 1767 and 1771 as the Royal Exchange originally.  This building served many purposes from her first days, namely as a customhouse for incoming trade and peoples, immigrants and slaves, as well as a military barracks and the majority of the "ground" floor as a dungeon to house prisoners.  At the time of construction, the Exchange stood before the wharves where merchant ships would have docked to unload their goods and to take on new loads, however, the building now stands more than a block and a half away from the water's edge at the highest of tides today.  The center image looks out onto Broad Street from the top floor where a ball was hosted for George Washington's arrival to Charleston in 1791, gives visitors a glimpse of how the city looked at the time of his visit.  As far as the significance to South Carolina, this is where the citizens on the new state first heard the words of the Declaration of Independence from the Crown come from the steps of the Old Exchange.  After leaving the historic hotspot at the heart of the old town and venturing eastward to the Waterfront Park, we saw our cruise ship moored at the docks as ships have been for hundreds of years in this historic port city of the Palmetto State.
Posted by t_mork at 12:36 PM No comments:

Within each year, there are two "windows" of time that a visit to the stately Biltmore Estate are early spring during the peak blossom of the azaleas and the other time is during the Christmas season.
Posted by t_mork at 12:12 PM No comments: