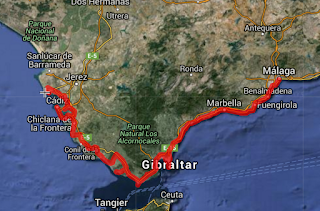 Before beginning my #WorldTour2015 trip, I had been training on my bicycle to prepare for cycling across Europe with the assistance of the rail system on occasion.  Following nine days committed to pedaling my way across the Province of Cadiz and along the Costa del Sol, I thought a train ride was well-deserved break.   Leaving behind my AWOL and bicycle gear I had my pack with some essentials for the next four days of adventures.  Starting my day with a high-paced walk to Maria Zambrano Station to catch the early morning train into the heart of the Province of Malaga, I was more than excited to be on my way to Ronda.  Navigating my way through the station being guided by the billetes signs, I passed through the glass doors to purchase my ticket.  I had exaggerated the wait expectation for the queue at the booking office - significantly.  I had imagined I would have to be waiting in a long line and be cutting it close to catch my desired train.  I entered into a nearly vacant room with numerous clerks eyeing me to see which one of them I would choose to assist me with my boarding pass.  Going with the most direct option from the door, I approached the middle-aged brunette lady with a cheerful smile about her face.  After saying a shaky buenas dias and my request to take the next train bound for Ronda, I was less than a minute away from waiting for 40 minutes for departure. 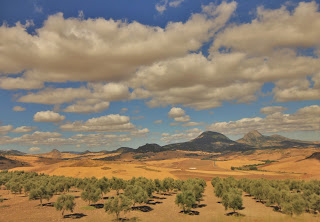 With time to spare, why not catch a cup of coffee and some fresh mango?!  Satisfying my stomach, I headed back to the platform to see if I could claim my seat just yet, however boarding was not going to start for a few minutes.  In the mean time, a few of the youngsters kept me entertained as they chased each other about the station and having the occasional parent try to run them down.  As the children started to tire themselves out, one of the attendants came out of the train and called for boarding to begin.  I am not to sure why I was nervous being I had traveled by trains in Europe before but nonetheless my brain over-thought the situation and got my heart rate spiked.  Soon enough those nerves were calmed by the passing Andalucian countryside.  My view darkened without a warning as the rolling hills were shadowed by the Gorge of the Gaitanes closed in around the rails.  Those shadows soon became pitch black tunnels passing under the mountains and whenever we broke out into daylight, I could set my eyes on the Caminto del Rey.  Once considered the most dangerous trail in the world until recent renovations, that is set at the top of my return trip to Spain!  Then again, the train was passing through rolling golden hills with perfect ranks of olive trees scattered across the them unlike the white clouds crossing the sky in their chaotic order above, but all taking my breath away.