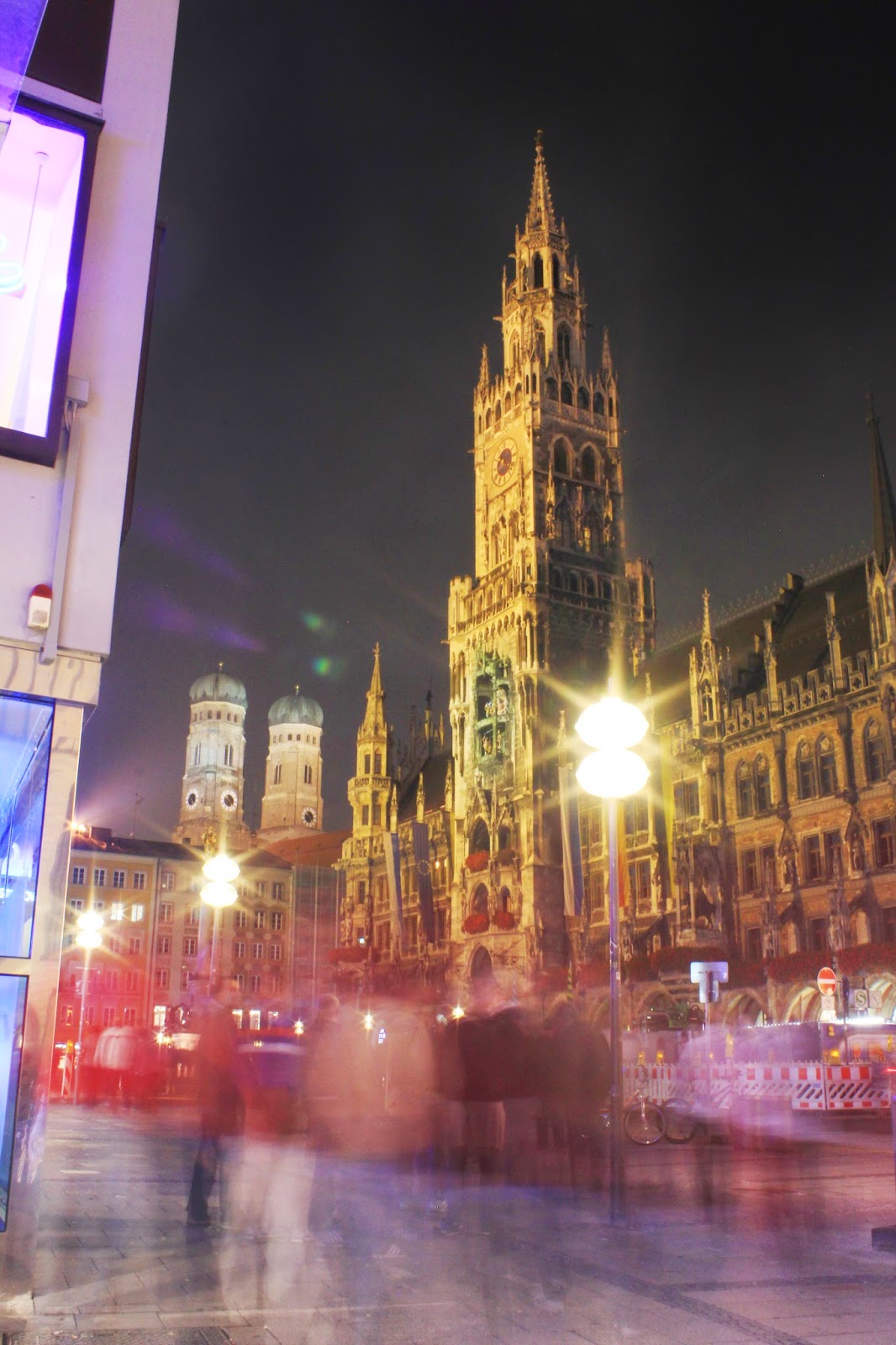 Arriving in the Bavarian capital city in the evening after spending five days in the quiet mountain town of Garmisch during the peak of Oktoberfest was quite the change of pace!  For my two night stay in Minga, the Bavarian name for Munich, was spent in the borough of Au-Haidhausen.  That borough lies just on the east side of the river Isar across from the Altstadt or "old city" of München.  Perfect place to explore the heart of the city and also a safe stumbling distance after partaking in Oktoberfest jamboree.  On my must see list for this trip after Neuschwanstein and the Ulmer Münster was Marienplatz, the true heart of the city and under the crowning tower of the new city hall of Munich or "Neues Rathaus" in German.  The city hall is heralded as one of the most beautiful municipal edifices of Europe with its elaborately decorated Gothic Revival style adorned with a manifold of statues of the Wittelsbach dynasty of Bavaria overlooking the square below.  As I entered the square from the east, I was welcomed by the brick twin towers topped with copper tiles of the Frauenkirche and the aroma of fresh pretzels large enough to serve as meals!  After grabbing a bite to eat and a crisp local brew to compliment, I continued my night time adventure around the medieval town filled with sounds of music from accordions, fiddles, and flutes filling the air with traditional tunes.  The most notable musical experience of the night came from the plaza of the state opera house as two men in the traditional Bavarian garb dueled off with their accordions fanning in and out, trying to outdo the others symphonic rebuttal.  Walking down the buzzing and bright Maximilianstraße, I found to be a path of Bavarian history and culture.  Terminating at the Maximilianeum, the street is lined with opera and music halls, monuments of Bavarian notables and shopping such as Chanel, Ralph Lauren and Gucci.  The Maximilianeum was built under the instruction of King Maximilian II as a home and school to Bavaria's gifted pupils and now serves as the house of the State Parliament.

After passing the Maximilianeum on my way back to my hotel, I found myself in the Wienerplatz or Vienna Plaza.  In the center of the triangular common space stands an important beacon of Bavarian culture "der Maibaum" or maypole.  The tradition of setting a 'may pole' dates back as far as the 16th century in Bavaria and is a deep running tradition for the area as the poles are painted with the colors of the state, white and bright blue and are adorned with symbols of the local trades and industries.  As seen on the pole on the left reaching high into the night sky giving challenge to the spire of Sankt Johannes kirche down the way.  But one of the most defining symbols of the city is the Mariensäule or Mary's column.  Standing in the heart of Marienplatz, the gold-gilded statue celebrates the end of the Swedish occupation after the Thirty Years War.  As the first column of this style depicting the Virgin Mary as the Queen of Heaven as she stands with one foot on the crescent moon north of the Alps, has inspired countless other statues of the like in the German kingdoms since 1638.  Regrettably, I only spent three days in the city, but I can without a doubt agree with the many ratings of the city stating it to be the "most livable" and "most happy" of cities in the world! 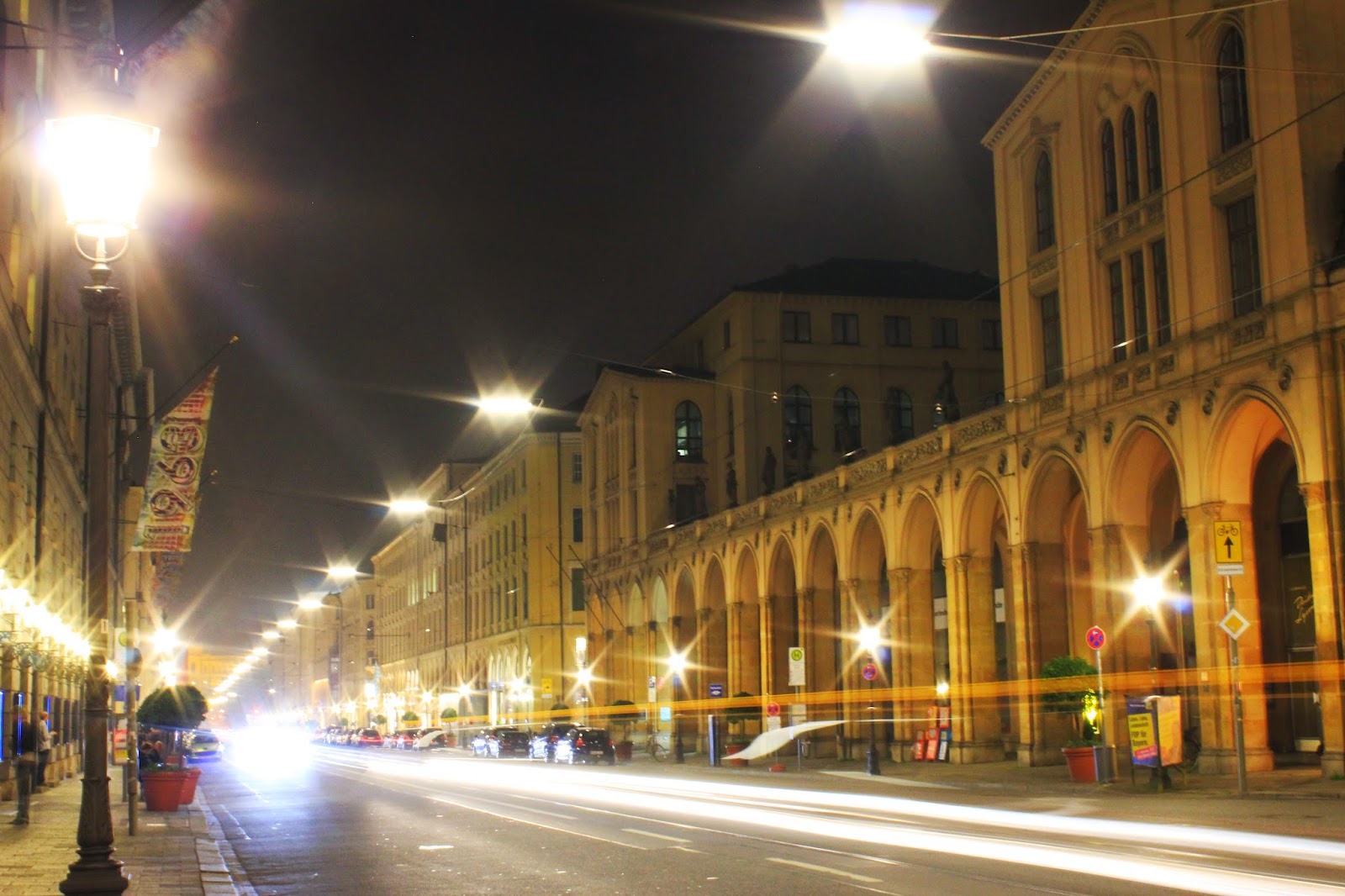