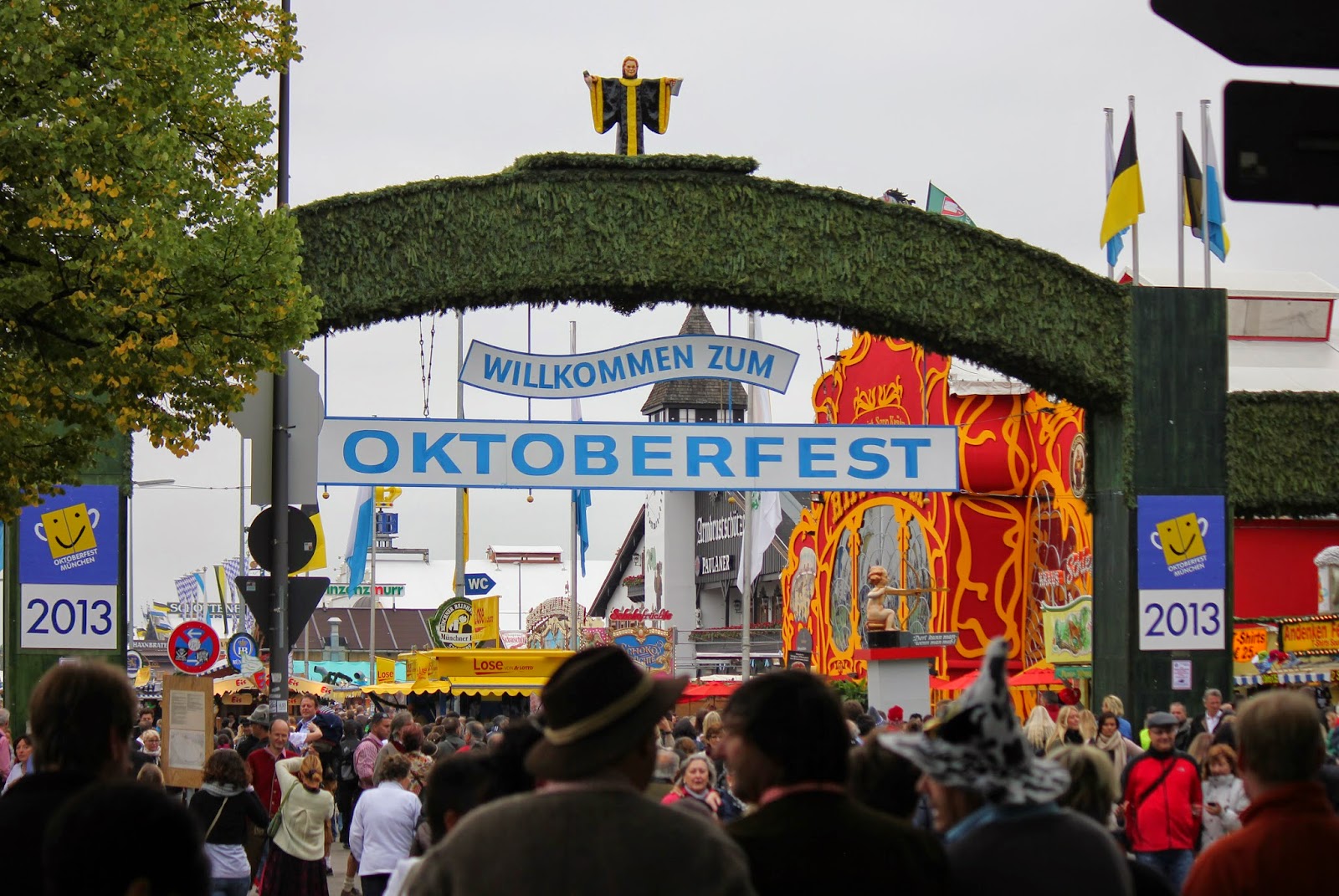 Walking under the Willkommensschild, or welcoming sign, to the parade grounds of Theresewiese, I was filled with the same excitement as the other six million and more annual visitors to the Bavarian celebration of the marriage of Crown Prince Ludwig and his bride Therese in 1810.  The grounds themselves are named in honor of the bride, Theresewiese, which translates to "meadow of Therese" and house the numerous beer tents with the capacity ranging from 5,000 to 7,000 seats for beer lovers from all around the world.  Aside from millions of liters of Reinheitsgebot abiding beer being served, the festival offers enjoyment to all with the carnival rides and games for the youngsters and shopping and activities for everyone.  All of that combined, my favorite part of the 16-18 day festival is the seemingly endless stalls of Würstl, Weißwurst, Brezen and two of my biggest guilty food pleasures - Apfelkrapfen and Riesenauszog'ne!  With this event being considered the most celebrated event of Bavarian culture, the traditional dress is a common sight walking about the festival.  I purchased a Bundhosen, which are longer and traditionally more decorated than the shorter Lederhosen, and went about the festival with my traditional alpine hat with the proper accent of pheasant plumage piece and the knee high stockings and Haferl style shoes as any good first-timer ought to do!

Of the fourteen tents that were scattered throughout the Wiesn, I made my way into the Löwenbräu-Festhalle with a few Canadians and Aussies that I had befriended out in the waiting area outside.  I found it interesting that the waitresses came out an selected the individuals that they wished to serve.  Being the tent I spent the day enjoying Municher brews in housed around 5,700 seats for beer lovers, I can see why the waitresses would like to choose who they get to contend with in the organized chaos to ensue!

Seeing the traditional Lederhose and Dirndln (yes, Bavarian-German plurals get a bit crazy on occasion) walking about the streets that are filled with the sweet aroma of the Lebkuchenherzen, the gingerbread cookies with sweet messages of love on them, makes for an captivating cultural experience!  I also learned that this is a moment where Bavarians can let their complex dialect shine despite the wish of the rest of Germany who often are confused by their linguistic oddities, but luckily for me, I have been exposed to the Alemannisch ways prior to visiting! One of the common Bavarian messages you can find on the "love cookies" is "I mog di", Bavarian for 'I love you', but be careful who you give one to because it means 'I want you' literally but since when do lustful feelings come into the mix of consuming a few liters of beer!?  Speaking of liters of beer, the amazing feat of the beer-toting waitresses of the beer tents that carry the "Maß" which is a one liter mug nine or ten at a time through a mass of caroling connoisseurs.