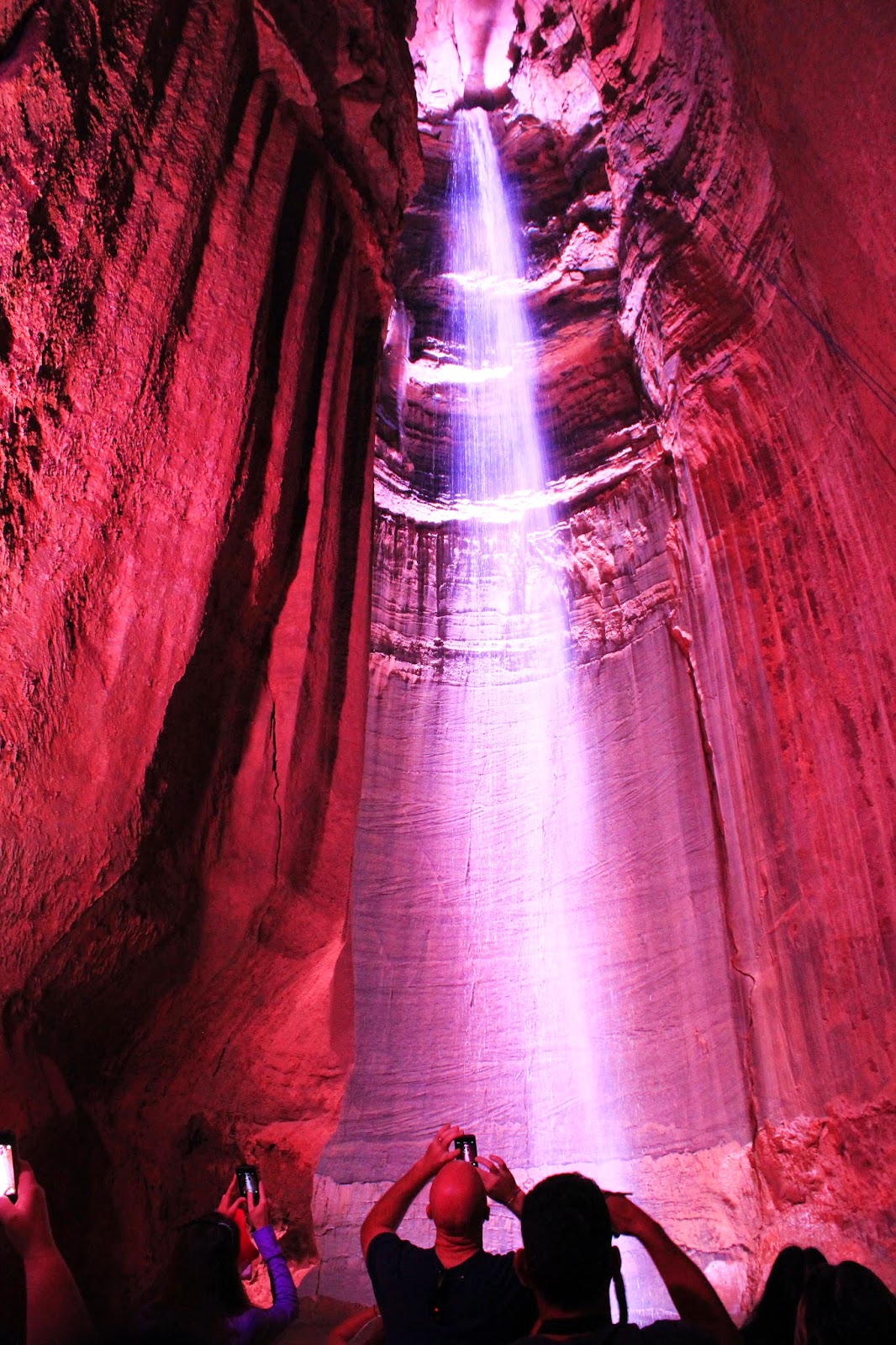 Perched on the slopes of Lookout Mountain overlooking the horseshoe bend of the Tennessee River just south of Chattanooga is a maze of an subterranean wonder known as Ruby Falls Cave.  The falls are named after the wife of the pioneer chemist and cave enthusiast that first explored this system of caves, Leo Lambert.  The Ruby Falls cave system has no natural opening to Earth's surface, therefore going unknown until Lambert began drilling above the neighboring system of Lookout Cave after closure due to construction of a railway tunnel.  Lambert was looking to find other depths of the Lookout Cave in order to reopen access to the caves for the public tourism but instead broke into a whole new wonder.  When the drilling operation began in 1928, the slow process of hammering through the limestone gave away to a small chamber.  Descending into the shaft, Lambert found himself in a confined space roughly four feet wide with a floor to ceiling height of about 18 inches.  This did not slow him and a small team from venturing throughout the system to see where they had landed themselves in what they believed to be Lookout Cave system.  As the cave widened the deeper he ventured, the discovery of formations that were new to the team's knowledge and when they came upon the falls, they knew they were not in the Lookout system, but an entirely different cave!  Up until the second descent, the caves were nameless but when Lambert took his wife down to reveal his discovery to her, Lambert would also name the showcase of the system after her: Ruby Falls. 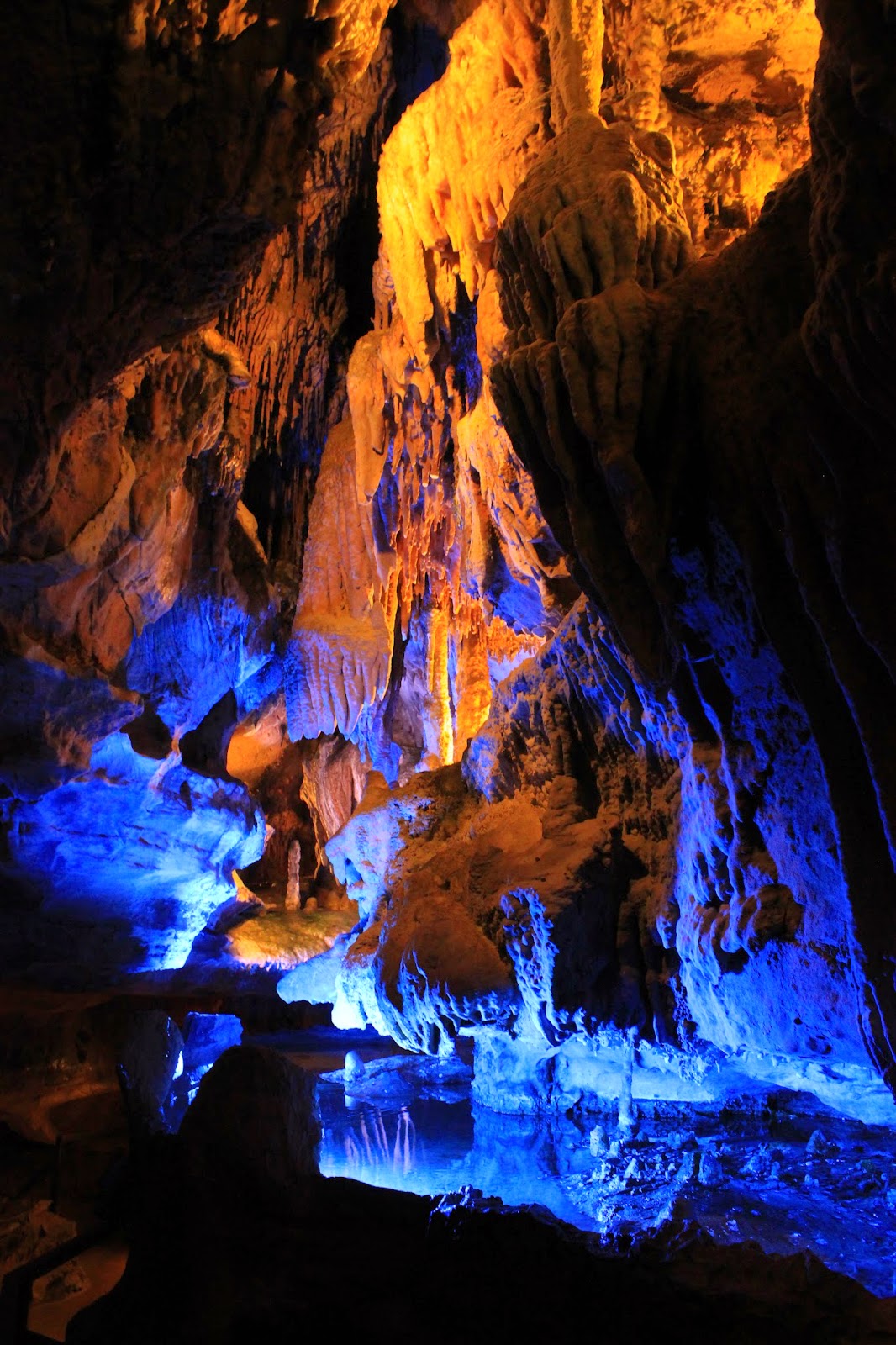 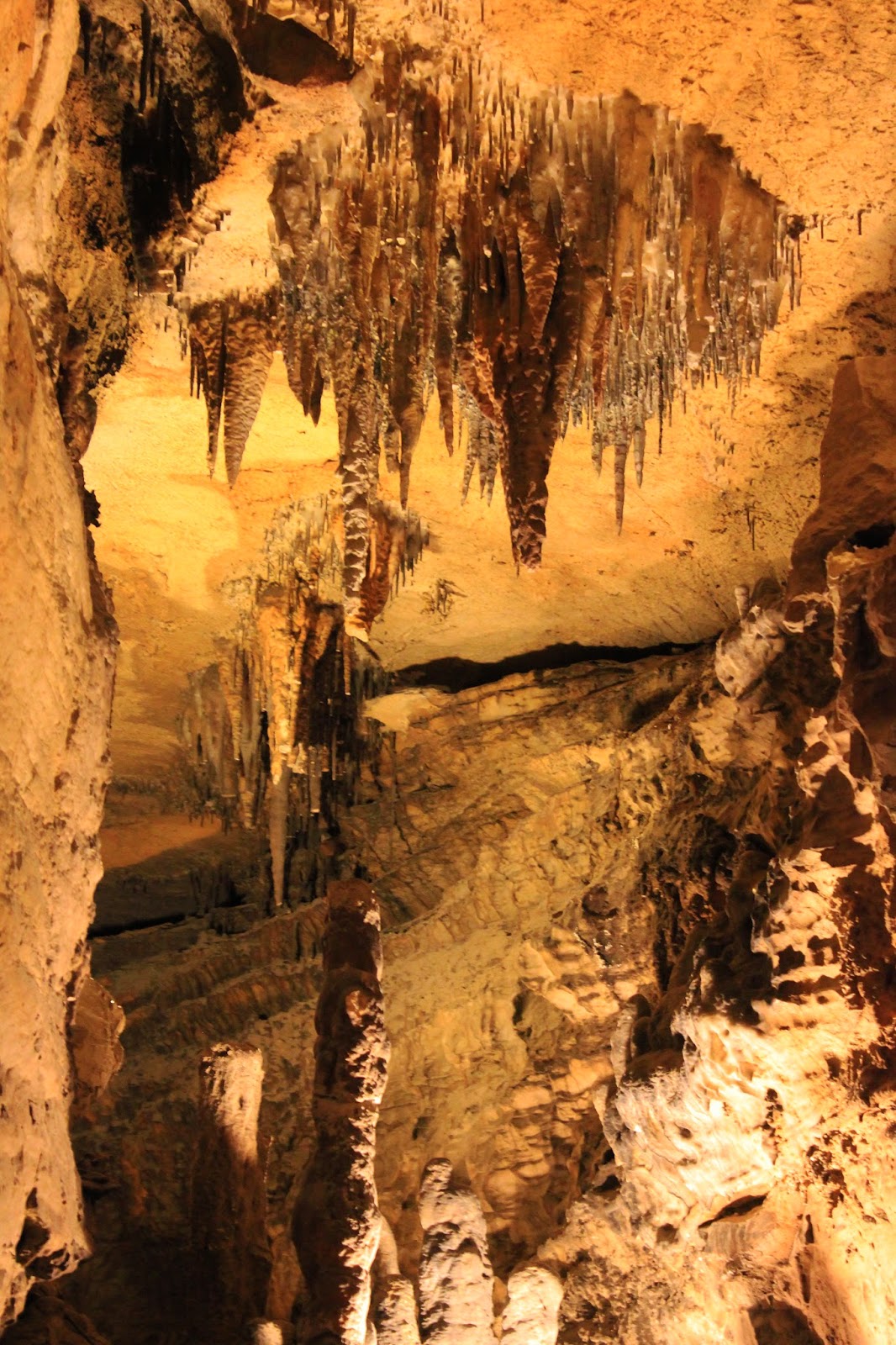 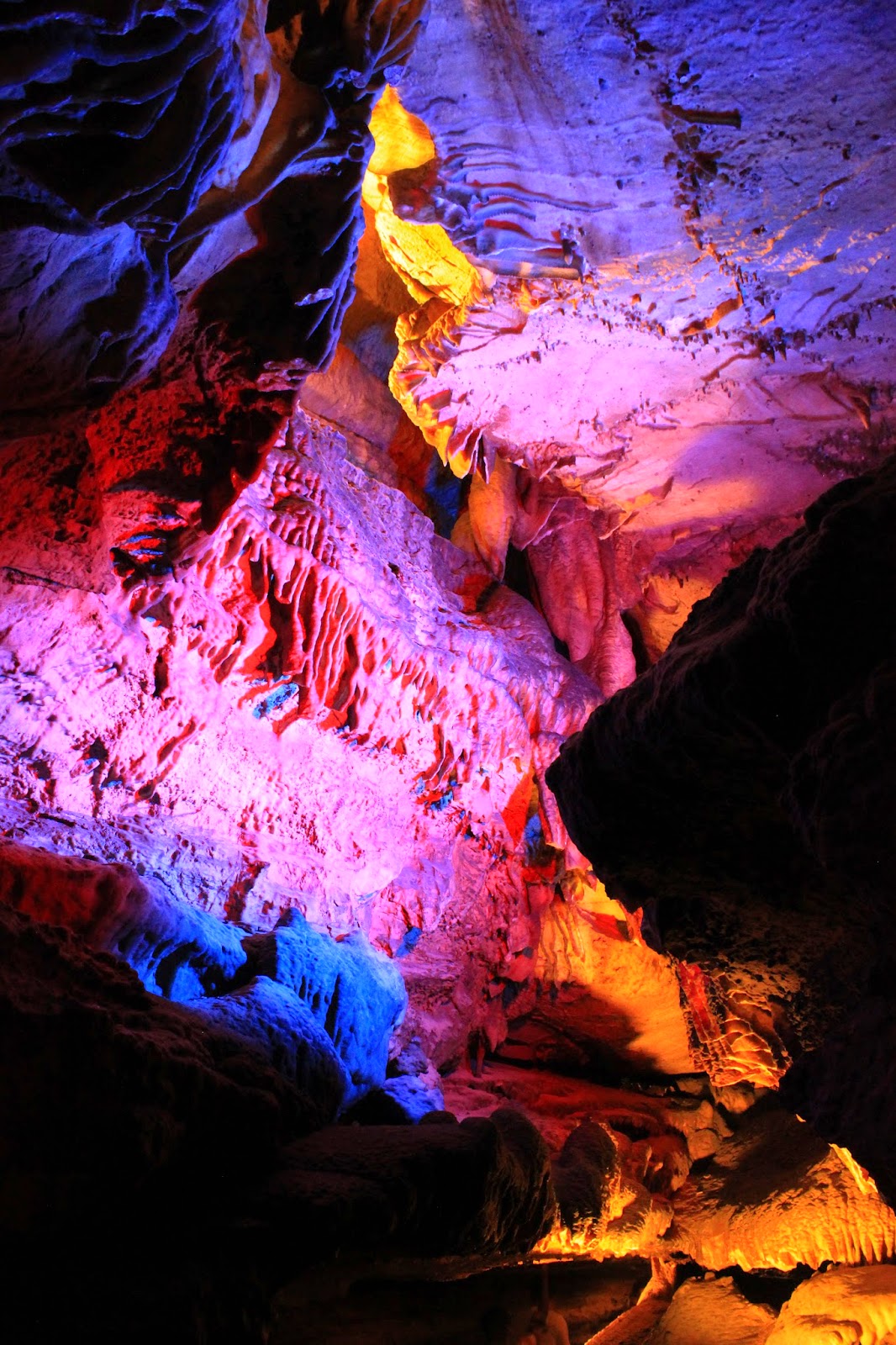 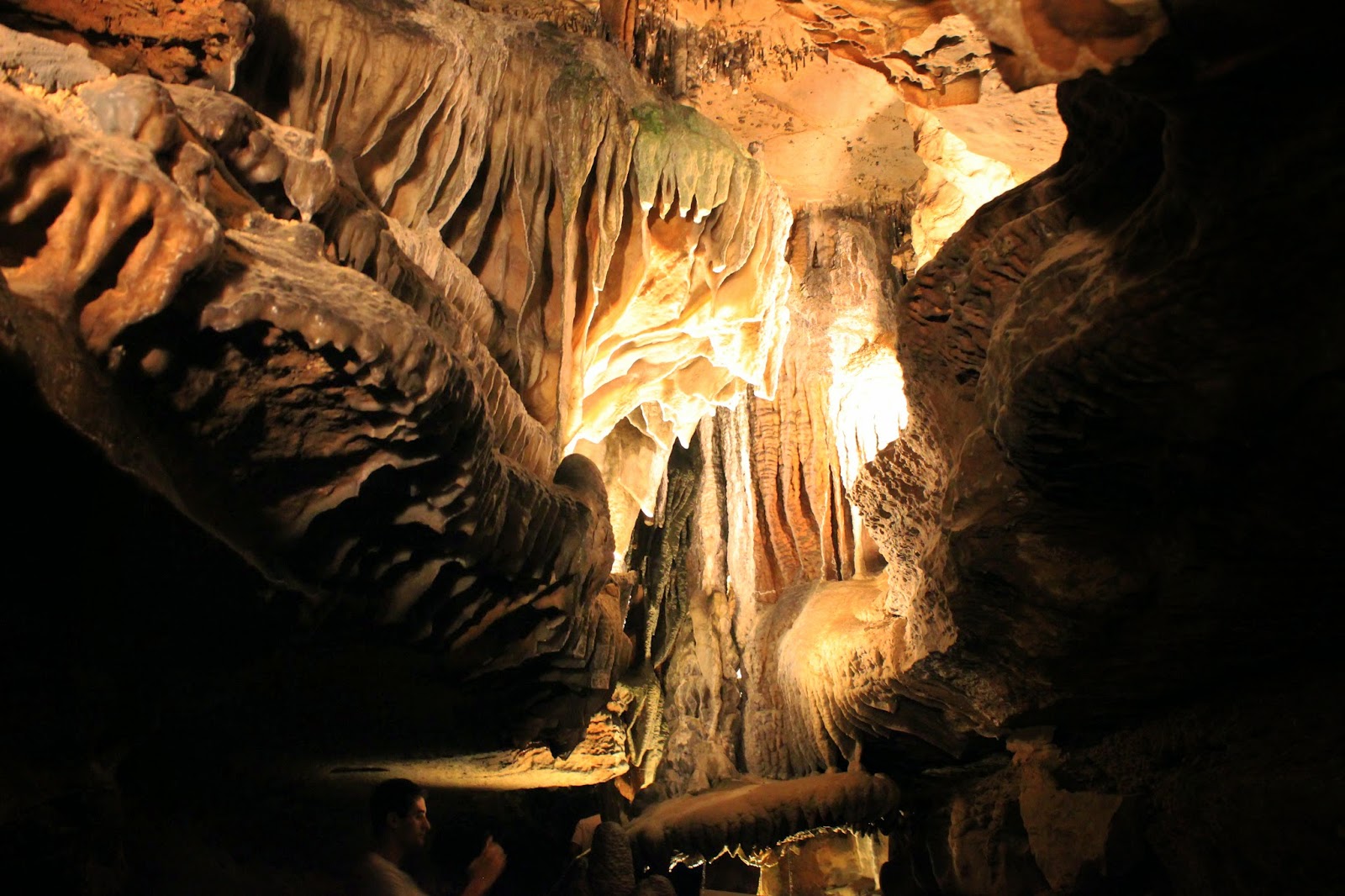 The waterfall that Leo Lambert honored with the name of his wife spill out into a large chamber for 145 feet to the pool below at a depth of 1,120 feet under the surface.  The falls are fed by natural seepage from rain water higher up on Lookout Mountain and the subterranean stream continues until dumping into the Tennessee River down below.  One point that the tour guides emphasize a fair number of times before bringing the group into the shaft to see the falls is to NOT DRINK THE WATER!  Despite the fact that the water is "clean", the high magnesium content within the water acts as a very effective natural laxative.  That becomes a major problem for any rebel against the guide's word being the nearest bathroom facility is thousands of feet away through an entire cave system and a few hundred feet of an elevator ride!  More about Ruby Falls, it is the deepest of the caves open for commercial tourism and the most visited underground waterfall in the United States.  Along with the fascinating waterfall, the cave system is home to numerous other underworld geological formations such as the "Elephant's Foot" that appears to be punching through the cave ceiling and the "Niagara Falls" that wrap along an entire chamber wall and seem to flow over into a small pool as if they were a statue of the waterfalls.
Posted by t_mork at 3:21 PM