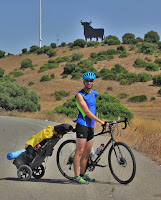 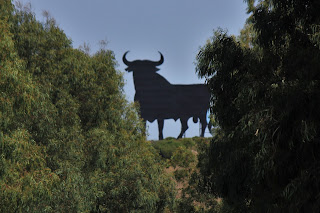 As I was finding my to Vejer de la Frontera along N-340 through the outskirts of Conil, a pleasant surprise presented itself between the trees as I looked up.  This was my first up close encounter with the famous Osborne bulls!  Once used as methods of advertising the Osborne family's sherry which led to various controversies locally and with EU regulations. Today, these 50 foot silhouettes stand as a symbol of Spain, but some will argue that they are representing Andalusian culture more than Spanish!  There are 91 of these bulls scattered out through most of Spain, and when I say 'most of Spain', do not expect to find them in areas such as Catalonia or the Basque country!   Luckily for me, I the routes I followed along my cycling adventures in Andalusia took me past others of the region, but this one will always be the most memorable one for me.  As I was snapping shots of the bull and the towers of the wind farm nearby, a Dutch couple travelling on motorcycle also veered off N-340 onto the pullout to see this bull for a few moments.  The wife asked me about my biking trek and then they shared some of their grapes with me as we all admired the Cadiz countryside and the sentry watching over the fields and rolling hills.