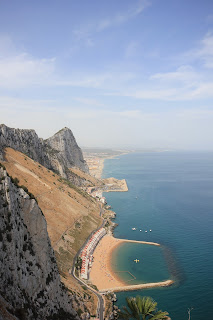 Starting my first full day in Gibraltar with climbing the famed Rock in mind, I had a slow start due to a few adult beverages I had the night before!  Taking the wise words of my Gibraltarian host, Nicky, for making the most out of the day I headed south through the maze of streets filled with churches, synagogues, mandirs, until I found myself at the Mosque of Two Holy Custodians.  I did not intend on going at the way to the Europa Point, but hey! Why not!?  Turning my bearings back north, I ventured on until I got distracted by cool architecture and the smell of food for it was snack time!  After getting a kebab or three and a refill of my water supply, I travailed up the hill in the summer heat seemingly rising as each step was made higher and higher.  As I climbed upward, I rounded a corner with a beautiful retreat spa built entirely atop a giant rock formation and for a moment, contemplated skipping the climb and just relaxing for the afternoon but that would not have been as much of an adventure!  So, I marched, well I steadily continued with sweat dripping from my brow on upward. Coming up to the entry point I was expecting to find the ticket booth, but finding the Jews' Gate cemetery and the monument of Pillars of Hercules were true bonus finds.  From there, I broke off from the beaten path to take the "scenic route" of the Mediterranean Stairs.  Now, there may be a reason as to why the Stair Option is not the beaten path but the views are undeniably breathtaking!  With that beauty comes a difficulty rating of "hard" and after taking the megalithic stairway up the eastern side, I can fully agree with that rating!  Throughout the 1,400 meter stretch I only encountered two others and they were taking the easy route - downward!  After playing around in a few abandoned fortifications and natural caves one, because they were there and secondly, they were a nice relief from the summer heat!  Charging to the top of the Stairs, the views only got better which led me to scrabble out to a precipice and relax my tired feet while taking in the panoramic wonder of the Mediterranean Sea along with the beach patrons enjoying the sapphire blue waters and sands with the sailboats and cargo ships slicing through the ranks of waves.  Cresting to the top of the Stairs put me right at the highest point within Gibraltar and on the path to Saint Michael's Cave.

Stepping into the air conditioned comfort of the cafe/souvenir shop/ticket office was a welcomed relief from my climb up the east side faces and to enjoy a liter of chilled water and ice cream.  After getting my fill of refreshments, I transitioned from the shop building that was a few decades in age down the stairs into the first of many cave halls that have been intriguing to visitors dating back to the early times of the Roman Empire.  Descending one set of stairs after the other into the depths of the cavern, I find the legend to be believable that the cave system would reach to the African continent!  Of the many information tablets about myths shrouding the caves, one is quite fetching and involves Gibraltar's most famous residents: Barbary Macaques.  Up until my exit from the caverns, I had not encountered these fiery primates and the first happened to be what I would consider to be a toddler.  As I headed upward (again) I came upon more and more of the macaques and in the strangest of places.  Making one of the final turns of the road, I met the mob of tourists with their cameras and phones all striving for that full frame of action going on in the center of the circle. What was their attention drawn to you may ask?  Two adult monkeys perched on the back of one of the Rock visitors!  I, however, made sure to keep my distance from the summit citizens from friends that had made the trek prior to me and know I fully understood why as those two riders started to brawl on her back.  Continuing on, I caught glimpse of a young photogenic macaque and after capturing what I consider to be the best photo I caught while on the Rock, I figured I could call it a successful day. I made my way down by the siege tunnels last used in the Second World War and the ancient Moorish Castle into the city to have dinner and a well-deserved beer!
Posted by t_mork at 3:38 AM