The last leg of my bicycling adventure in Spain was filled to the brim with excitement, frustration, and as I look back at that day, gratification.   To make time, I cheated by taking the bus from Madrid to Barcelona being I had a timetable to follow and Oktoberfest was coming faster than I had expected.  Going back to Barcelona, I arrived in the heat of rush hour on a Friday.  To add to that, I had not done my usual planning ahead and decided to run the risk of finding a hostel off-hand and going from there.  Once the bus pulled into the Barcelona-Sants station, I nervously found a coffee shop with wi-fi to see what was nearby for a hostel for the night.  A little to the west of the bus station was a deal at the Yellow Nest that I could not pass up.  After a breathe of relief that I knew I would have a roof over my head amid what seemed to be a city of chaos was much welcomed as was the cup of coffee!  Setting out to find this hostel was another ordeal.  While making the initial booking, I thought to myself "Ah, it's quite close!  Shouldn't be a problem."  Two words: Murphy's Law.  The simple left-right-left guide that I made myself over this two click bike ride was significantly more complicated than it should have been.  However, there was a success after I realized I passed by the Passatge Regent Mendieta was the "street" that I was looking for and was nothing more than a breezeway.  The hostel was unmistakable with the bright yellow paint that signaled travelers to their temporary home.  I think it was the fact that Barcelona was so busy was one reason why I felt nervous but also that I was now accustomed to staying in people's homes that I had a sense of foreignness when staying at a hostel again.  That all washed away with the softness of an English accent.  When I passed through the doorway into a land of more yellow, a warm welcome of a girl about my age gave me comfort.  After getting all checked in, she told me I picked a good night to stay as they were hosting a seafood feast up on the rooftop that evening for a price that I could not pass up!  Once I settled in and washed off the day's stress by a long shower, I headed up to the rooftop to find a spot at the community table.  Here is where I learned why Barcelona was in a state of chaos.  Soccer.  That weekend was the match between one of Barcelona's longest standing rivals - Seville.  Not only that, Camp Nou, the home stadium to FC Barcelona, was literally 350 meters away.  Most of the table talk was naturally about soccer and the predominant accents this matter was conducted in were English, Scottish, and the handful of Aussies.  Equally quiet in the soccer conversation was a Canadian brother and sister travelling duo.  I first inquired about their travels which started in Iceland then skipped over to Amsterdam with Barcelona being the last stop of their quick adventure.  Then came the question to me about my travels.  Somehow, I became the center of attention at the table of about 20 people.  I told a few of my tales of struggle as I biked across Andalusia and of my anticipation for my trek to Everest and my upcoming adventures across the world. 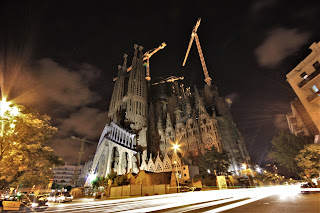 The world seemed to go quiet as we sat up on this rooftop and I laid out my life for these once-strangers but as the night went on - my family.  I felt like a true story-teller as they all sat focused in on my hand gestures and somewhat dramatic recreations of events that had happened on the road to the point where we all met at that very table.  As the sun set, the seats began to empty and I had my own version of nightlife to go live while on my one night stay in one of the world's most interesting cities.  Objective número uno was to see the Sagrada Familia with my own eyes.  I have that bucket list item half-way checked off for I already have my return trip penciled in for 2027 to see the completed work of art!  Once I took in the sky-reaching spires mixed with the cranes that are bringing this masterpiece to life, I decided to call it a night earlier than planned.  But only after getting more xurros (Catalan spelling of churros) to celebrate my time in Barcelona from one of the many street markets filled with patrons proudly sporting their home colors of blue and maroon with the occasional chants of "Barça" filling the air. 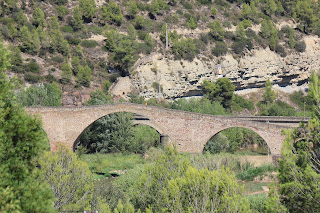 I woke up the next day recharged and ready to hit the road!  I had my breakfast with a few of the travelers I had dinner with the night before and they gave me a hearty farewell as I wheeled my bike through the hostel with my cart in tow.  Stepping out into the cool morning, this day felt great to the point where nothing could go wrong!  Once again, Murphy's Law.  Weaving my way out of the Mediterranean metropolis, I acquired a flat tire just as I was getting this ride started.  On the very outskirts of the city in Molins de Rei, a sharp pop came from beneath me.  Following a heavy sigh, I unhitched my cart and dug out my repair kit.  Quietly cursing my predicament, I flipped my bike to start removing my back wheel to make the necessary fixes.  Luckily, I had the morning shade and a closed shop door to work on my AWOL as a few passing citizens curiously looked onto my doings.  Once the puncture had been sealed, I began the dozens of muscle straining hand pumps to get air back into my tire.  To this down was an up just down the road.  Cautiously crossing over the Llobregat river with my fresh fix from Molins de Rei on the crowding N-340, I safely made the exit onto the quieter N-II.  Still nervous about my fix, I began my uphill ride for a few clicks and to my left as I was passing through the next town of Pallejà was a quaint bicycle shop Bici Cross Shop.  I knew I did not put enough air in my tire and I also felt that there was no such thing as too many patches, so I hoped and prayed that the shop was open and sure enough it was!  I wish I could remember his name (or find the business card I grabbed), but nonetheless I would like to honor this man!  As a speaker of limited Spanish and him being a proud Catalan speaker, we fumbled a bit until one of his good friends stopped by the shop and helped us understand one another.  The shop owner did more than help me out.  He inspired me and has fueled my love for bicycling even more with the pictures of him and his adventures on two wheels.  More so, was the inspiration that I gained when he very proudly showed my the pictures of his brother racing in the some of the world's greatest bike races and to my greatest surprise the Tour de France!  When the stories came to an end and the time came for me to pay my bill, I do not know if it was due to me being American and stopping in HIS SHOP or if it was the fact that I was so happy and enthralled to listen to his stories that he tried sending me out the door free of charge.  I refused to not pay so he threw in a few bonus items and a big hug with a smile from ear to ear.  I was officially ready to take on my last leg of my bicycling tour in Spain!  As I pushed northward, the modernness of Barcelona was rapidly transforming into a romantic rural simplicity that I found to be remarkably captivating.  Looking at the map, I can not quite recall where I was exactly, but I stopped alongside the road to simply appreciate what was before me.  Surprisingly, I did not take pictures of that moment but the view is forever etched into my memory of the green trees among the dry hills with humble farmhouses dotting the landscape.  Continuing on my way, those hills began to grow taller and taller.  With anticipation building and my heart racing not only from the uphill struggle, but the first glimpses of the monastery of Montserrat finally coming into my sight, one of my biggest Spanish dreams was becoming a reality with each revolution of my pedals!