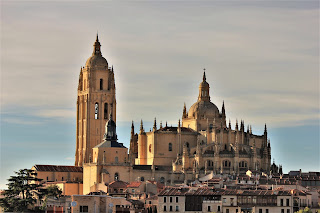 Segovia.  One city that I had dreamed of getting lost within but did not have penciled into my travel plans for #WorldTour2015.  But, at the recommendation of my Madrid host, Pierre, I took one day from exploring the capital city and hopped on a bus for a two hour ride to one of the most fascinating cities I have ever explored.  Stepping off the bus into the hot, dry inland air under the bright Spanish sun and beginning my trek with no certain destination in mind I set out with my camera ready to go.  Willingly being lost, the thought crossed my mind of who else found this place.  Even before coming to the city, I was well aware of the impact Rome left within the city.  My friendly reminder of their contributions was the massive aqueduct stretching across the city but also the avenue that I took to begin my adventure - Avenida Acueducto. 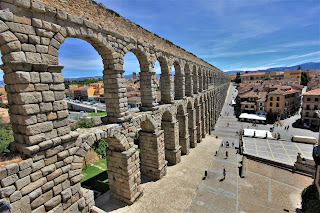 Once I overcame the awe factor of the aqueduct, I noticed the tourism office in the shadows of the high arches and decided getting a map might be a wise decision.  Enjoying the air conditioning, I began to read the informative posters and history of Segovia.  Here is where I learned where the seed that laid root in this valley came from and I was more than surprised!  Seeing the term celtíberos peaked my interest all the while changing my understanding of her history.   These streets are the same paths that people from what is today Austria settled thousands of years earlier, paved by the Romans, expanded by Moors from Africa, and now visitors from every corner of the world to include a small-town boy from Montana.  The origins of the name of Segovia are Celtic which at first seems out of place for central Spain.  The reasoning behind why the celtíberos gave their home this name has many tales but the name has undergone transformation after transformation as new victor's flags have flown over the rolling hills that make the city.  The first given by the Celts comes from segobriga directly translating as the 'city of victory'.  Today, sego can easily be seen with the German word for victory - Sieg (pronounced ZEEG)  and briga is a bit more of a stretch with the modern 'burg', but use a dash of imagination or just a few thousand years of "changing hands" of control of this magnificent city.  From Segobriga to today's Segovia can be described by the phrase "the more things change the more they stay the same."

Now, that whole thought did not just happen in the tourism office.  That idea was on simmer on the back burner in my mind as I wound up the bell tower of the crowning cathedral of the city or the grand halls of the magnificent fortress commonly known as Alcázar (for more about the influence of Arabic in Spain, check out my posts from Granada)  The thoughts raced through my head.  Knowing how large our world is, I felt the smooth stones that rose above making the arches the Romans constructed to build an aqueduct system that went unmatched for centuries to follow.  As I strolled through the gardens of the Alcazar with olives planted by Muslim hands in a predominately Catholic Christian country today.  Taking in the peaks of the Guadarrama (from the Arabic wadi ar-rama meaning 'valley of sand') and thinking how different these mountains are from the Alps that the Celts left behind.  Yet, all of that culture has merged in this one spot and grown into a mystical but magical place on Earth.  With out a single doubt, as I look back on the day spent in Segovia I smile with nostalgia despite how hot and sweaty I got by the end of the rushed day of exploring.
Posted by t_mork at 1:39 PM