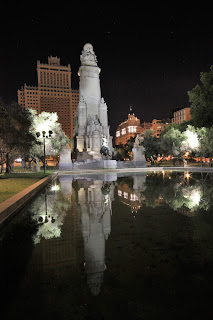 In my planning of #WorldTour2015, I had penciled out that I would hop on a train in Granada and comfortably cross inland Iberia bypassing the scorching summer sun.  Looking back on that last sentence, the keyword is penciled.  When I looked at train tickets months prior to arriving in Spain, the trains were active and running without an issue.  However, a few weeks before my arrival in Granada, Renfe embarked on replacing most of the rails surrounding Granada.  A memo that I missed largely.  So, as I casually left my temporary but lofty perch in the Albaicin for the main station at the bottom of the "hill", I was in for a surprise.  I started to gain suspicion as the entry to the station was quite vacant and the heavy presence of construction cones.  Cautiously, I entered the station being I had already purchased my train tickets in advance to the service counter to find out what my travel fate.  After bantering back and forth in between Spanish and English about getting my refund and then what to do being the train was not in operation.  His blunt response was to take the bus and then leave his booth.  Feeling a bit on the helpless side and rapidly showing the distress on my face, the older gentleman in the office at one of the back desks shuffled over to where I was standing with my bag at my side.  He softly asked if I was in need of help to which I gratefully responded to with a yes.  He pulled out a half sheet of paper and began to draw a quick map for me to get to the bus terminal.  Graciously taking his advice, I grabbed my belongings and threw them on my bike trailer and began pedaling as if to qualify for the Tour de France toward the terminal.  Arriving with ease due to my hand-drawn map, I fought the queue with a few minutes to spare!  So I thought.  Once I made it down to the bus stall to go to Jaén, the driver informed me I needed to get a ticket for my bicycle too!  So, I ran through the station to the ticket counter to get a €4 ticket for my AWOL to go along with me.  Luckily, that driver held the departure by two minutes which I felt terrible about!  Then the bus was set for Jaén where I could catch a train to the capital city.  In all of this time, I did not have wifi to tell my host, Pierre, that I was going to be a few hours later than I had anticipated.  Luckily, he was very understanding of my predicament! 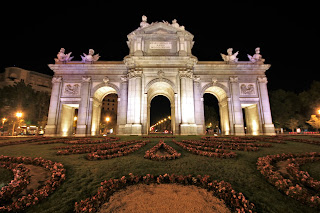 After a few hours of traversing the northern reaches of Andalusia, I began the northward journey to the heart of Spain.  Once I landed myself in the massive train station of Atocha, I hurriedly set off to Pierre's place.  What the map showed me was a simple "go down this street, make a left here, go until this plaza and down this street".  First off, the "go down this street" was actually uphill and during horrible traffic.  "This plaza" was more like three plazas somewhat interconnected but I finally found the narrow passage that would lead me to the right door!  After all of that, a shower was much welcomed!  Following some rest, the adventure continued as Pierre and I took a super-tourist tour around the central part of the city, learning "facts" that him and I equally questioned as the group meandered throughout the majestic metropolis.  After having the best steak during my Spanish stay, we set off for a night on the town!  For Madrid being the third largest city within Europe, we vitrually walked through the entire city - well, the central and main part.  Furthermore, we avoided doing too many illegal things surprisingly.  There was a moment where we almost hopped over the fence to explore Parque de El Retiro and we sort of crossed traffic where we should not have to get a better shot of the Fuente de Cibeles fountain.  Needless to say, Pierre made my Madrid experience an unforgettable one and I look forward to my return trip to check off the remainder of must-see's!
Posted by t_mork at 2:24 AM