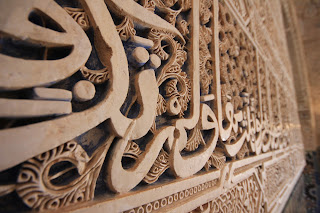 Earlier in my years of studying the Spanish language, I encountered the name "Alhambra".  After learning the fundamentals such as hola and huevos (because huevos rancheros are a wonderful blessing to any breakfast table) I omitted the 'h' from the word.  My teacher, Señora Porter, stopped me and subtly tipped her head side to side and told me that I needed to say the 'h' in this one.  I am curious by nature, but tell me something is different and that curiosity spikes to a whole new level.  I feel old saying this, but the internet was still a fairly new thing, therefore I cracked open a few books to learn more about this anomaly of that day's lesson.  One of the first pictures I saw inspired me to take the image to the right and also started a whole new question for me.  Why is there Arabic written on the walls of a building in Spain?  That explanation is a five pound book in itself but I will give you short and sweet of the history and how this palace helped my love for architecture, linguistics, and of course, travel.
Today, Alhambra stands upon a lofty hill in Granada which is a major city in Andalusia.  Now, let us take those three words of Alhambra, Granada, Andalusia.  In our world now, they are familiar within the Spanish language.  They, however have been tossed around, bruised and beaten by the linguistic blender.  "Alhambra" is derived from the Arabic الحمراء and transliterates to al-Hamra'  (I put the capital 'h' there being it is what students of Arabic would call the big h with a good push of air in the intonation).  That name comes from "حمر" and those three characters combined have a long list of translations into English but we are going to focus on the contextually correct one for this palace which is red.  Although, you may ask why is there a 'b' in Alhambra.  Remember that blender I mentioned?  As the Arabic language traveled across northern Africa with Islam, the language was adopted but with a handful of eccentricities of the native Berber, Coptic, Egyptian, and other groups of northern Africa up to the Strait of Gibraltar (also a derivation of Arabic!)  That 'b' is just something we have to exception as "linguistic bastardization".  Moving onto Granada. A prime example of eternal etymological disagreement.  The Romans of Iberia cultivated pomegranates in the area and one could say that Granada grew out from the Latin granatum, the word pomegranate.  Turning to the other side of the argument is from the Moorish standpoint.  Granada in Arabic is written as غرناطة.  One issue with dialects of Arabic is how each views the alphabet.  The letters of غ and ق are seemingly used interchangeably within the African takes on Arabic.  Taking that into consideration with borrowing of a Berber word, we can form قرناطة.  Throw that in front of a Moroccan today and they will say it as "Granata". 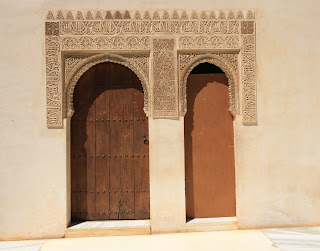 Moving this along, that roughly translates to 'hill of strangers' in Moorish Arabic which is understandable being the population of the area at the time of the Moors' arrival would have been strange indeed.  Last but not least is Andalusia.  Keeping this explanation as short as I can, when the Moors arrived to Iberia the remnants of the Gothic peoples from Germania were lingering in what is Spain today.  Those people were of the Vandal tribe.  This is where this gets fun linguistically!  Vandal is believed to come from wandeln (w's sound like v's in German) which is an archaic way of saying 'wanderers'.  Bring that over to the Latin world, we got Vandal.  Now, there are two sounds that Arabic speakers have a hard time grasping are the letters 'p' and 'v'.  Instead of struggling with that, the incoming Moors just threw away the 'v' and tacked on their definite article "ال" meaning "the" and gave us الاندلس or al-Andalus.  All that said, the history of Alhambra has been clearly marked by cross-cultures being fused together in one of the world's most beautiful pieces of human creation.

Now, that we all know a brief history behind how Alhambra came to be, I would like to share my excitement from my visit to this incredible monument of art, culture, and architecture.  I began my biking adventure on the western side of Andalusia I pedaled with anticipation for twenty days of this visit.  What kind of anticipation?  Let us just say I had a picture of this very palace in my childhood bedroom for years alongside Neuschwanstein and the Acropolis of Athens.   When I had my tangible tickets in my hand early in the morning, the wait until my 1330 time slot for my entry into the palaces had my nerves on end.  Side note, if you are planning a visit here, buy your tickets in advance!  I ordered my tickets a few days in advance and even then the availability was slim!  Although, for me the afternoon was perfect for photography and lunch - because food is muy importante.

These rooms and gardens of the Nasir sons were crafted over more than two centuries.  They have survived wars ranging from the Reconquista of Isabel in 1492 to the last civil war of Spain in the 20th century.  That in mind, the beauty of the plaster craftsmanship is all the more impressive!  As I stood under one of the vaulted ceilings looking up into the geometric maze of shapes and textures the thought of the artisans did all of this work by hand and without computer based design!
Posted by t_mork at 3:21 PM