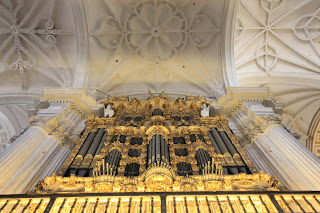 Santa Iglesia Catedral Metropolitana de la Encarnación de Granada is not like any of the other Spanish cathedrals and not just because of its long name either!  The beginnings of this cathedral rose up out of the fall of the Nasrid Dynasty, the last of the Moorish rulers in Spain, and from a mosque that once stood in the cathedral's place.  The dozens of trumpets of the two organ bodies still herald the victory of the reconquista resulting in a reunification of the Spanish kingdoms under Queen Isabella and King Ferdinand.  Not only is the cathedral a dedication to this victory, but the Royal Chapel, one of the first and defining pieces of Isabelline Gothic architecture, is the final resting place for the royal monarchs.  After passing through the three high arches dominating the plaza before the cathedral, all are welcomed by the 181 years of architectural fashions spanning from Castilian Gothic to Spanish Renaissance with Baroque influences. 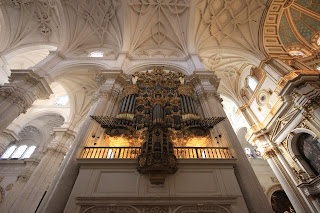 Resting high up in the lofty, argent naves are two Iberian twins.  Commanding from the heights of the central nave are two "fraternal twins" have been given the names by the naves in which the sing into.  The first of these to be finished was the romantic style evangelio or Gospel bears more romantic features in comparison to the epístola or Epistle of baroque character.  The Gospel was built over a twenty year period until the pipes finally sang in 1764.  While the Gospel took two decades until completion, the Epistle was built and installed in three years starting in 1764 and giving definition to dozens of Spanish organs from Almeria to Sevilla for the years to come.  The organs are the masterwork of Leonardo Avila who is one of Spain's most highly regarded organ builders and the creator of the instruments that have come to define the following centuries' pipe organs across the Iberian peninsula. 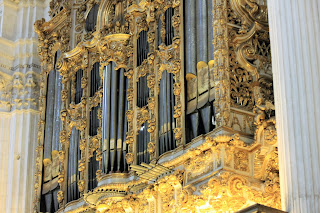 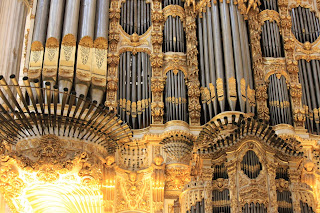 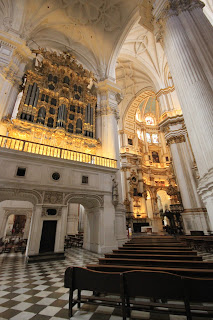 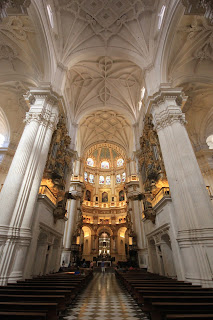 As I spent the afternoon walking from one chapel to the next, I always found myself being pulled back into sight of these kingly instruments!  The craftsmanship in the casework rivaled the paintings adorning the side chapels.  The pipes were like any other that I had ever witnessed.  There were numerous times that I hoped to find a little sign saying "Want to play them? Ask!" but I had no such luck!  The shear beauty of these two had me captivated.  I do not think I could have brought myself to leave Granada if I were afforded the opportunity to sit at the manuals and have the pipes sing in the immense halls.  But there may come a day when the dream of playing on Europe's great organs may come true!   Until then, I have appreciated this monumental piece of art, engineering, and cultural from below in one of Spain's grandest cathedrals and look forward to my return one day again.
Posted by t_mork at 2:40 AM