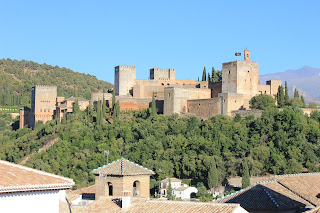 As I was hashing out the route for my 2015 World Tour, I tried to steer away from the traditional tourist attractions in my travels.  But how could I leave off Alhambra the list?!  As a lover of history, architecture, art, and I will even include the Arabic language to the list although to say 'love' in the same sentence as it makes me cringe slightly.  I am glad I made that sacrifice!

I knew I was going to dedicate a few days to the city so I made my accommodation plans more in advance than usual.  I scouted out the options on AirBNB and CouchSurfing for a place close to it all and friendly to the budget.  My golden ticket stay was with Alessandro in his awesome apartment in the Albaicín area which was founded more than 1,000 years ago.  But with all those awesome features there has to be balance somewhere, right?  As I was chatting before my arrival with Alessandro I mentioned that I was travelling by bicycle and had a small cart in tow.  That is where he warned me.  The Albaicín is an wonderful place... unless you have a bicycle.  He sent me a message of the "easiest" route to make to his apartment and that route had a measly 72 steps where steps were warranted and precipitous 'streets' up to the quiet placeta on top a knoll in this historic quarter.  Sadly, I did not get to meet Alessandro in person being he was called out of the city for work, but Diego, one of his best friends was around to let me in and then gave me a world class tour of the neighborhood!  After I got settled in and showered after the bike ride from Loja, I got the tour of the apartment from the main floor to the top where I had the most spectacular view of Granada!  The image above testifies to that!  Which also makes for a great way to enjoy a bottle of vino garandino as the sun sets.  I ought to know being that is how I ended each of my days during my three day stay!  Day Two I had set aside strictly for touring the Alhambra and her grounds, which I highly recommend spending the entire day being there is almost too much to take in at once!  (Plus, get tickets in advance and for the morning time if at all possible!)

Freshly charged with a few cups of Andalusian coffee racing through my veins and a great night's sleep in an actual bed, I was ready to take on the marvel of the Nasrid legacy!  My journey to the palace and fortress begin as passed in the cool shadows under the Puerta de las Granadas (shown below) with a few other early bird visitors.  When I kicked off this adventure, the morning was quite cool and fresh, but by the time I scaled the cobblestone way upward to the entry I was warmed up and ready for explorations!   Once I had my hard-copy tickets in hand, made my way westward through the gardens to alcazaba which is the latinization of the Arabic القصبة (al-qasba) to take in the higher viewpoint over the city.  While on that walk, I noticed a small diversion over to the baths that most people were overlooking this small feature.  As I entered into the the vaulted rooms of the bathhouse, there were more than one fascinating engineering feature that I spotted.  The one that stood out the most were the skylights that also served as vents in each of the rooms.  To get the image on the left I speed up my shutter and closed the aperture to capture the outline of them.  For the image on the right I did the opposite with my camera to demonstrate how the light pours into the rooms of the bath-goers.  Once I passed through the maze of the baths, I meandered my way to the city overlook and standing upon the walls of the oldest remaining parts of the fortress.

Throughout my day of explorations, I was in awe of the span of architectural styles that are present atop the Sabika Hill ranging from early Peninsular Islamic to Classical Roman with touches of Castilian Baroque and Isabelline Gothic.  Filling the voids between each of these elements are gardens of plants from the reaches of Iberia, Africa, and the Orient all surrounded by fountains of spring fresh water.  Looking back at that day, I am able to say I saw so much of the world all in one place with centuries of history quite literally written on the walls of this magnificent complex of stucco and the red clay that gives Alhambra her name. 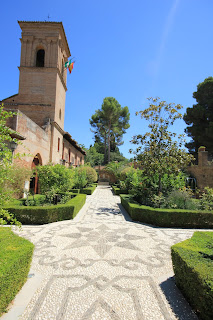 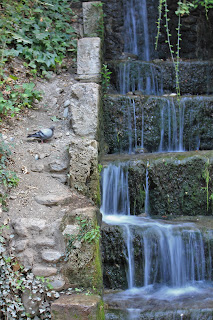 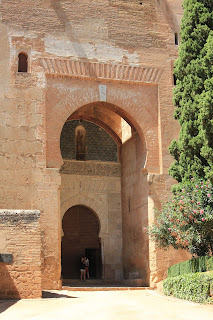