My curiosity in Manresa began long before I started planning out my big world tour which landed me in the heart of Catalonia.  More than ten years prior to me setting foot on the Iberian Peninsula, I crossed the threshold of a mission church back in my home-state of Montana.  The teenage me was struck with awe of what beauty this structure gave the world.  Not only is the mission set in what I believe to be one of the most beautiful mountain ranges of the state, but the grace and artistry within this late 19th century brick church.  For me, most of the elegance came in the form of the 58 hand-painted murals that adorned the walls and vaulted ceiling of the Saint Ignatius Mission Church.  More impressively, those paintings were done all by one man and not just any man but the mission's cook at the time in the late 1890s!  That led me to learn more about the mission and it's history once I got home.  At the time, we were using dial-up internet which is a lesson in patience in itself.  Opening up the search with the mission church, I followed the path back to the man that is the namesake of a small church on the other side of the world from his native Spain.  The founder of the Jesuit Order, tolerant theologian and spiritual leader during the Spanish Inquisition, and true to the definition of being a saint all came from a young Basque soldier by the name of Íñigo López de Loyola.  After tracing all the history over a few days of research and waiting for images to load painfully slow on our household computer, I was fascinated by the ideals of the Jesuits and also their craftsmanship in their structures across the world.  From that point on, I have made pilgrimages to the works of the Jesuits across the world from Saint Joseph's in the heart of Georgia to magnificent Church of Sant'Ignacio just down the street from the Pantheon in Rome.  But where does Manresa play into my journey across the world and Saint Ignatius?

Reflecting back on all of those internet searches I had made as a teenager in our basement rather than doing my chores gave me more than enough reasons to want to see Manresa with my own eyes.  Not only is this city surrounded by the incredible Montserrat massif and rich with culture, this is where young Íñigo transformed himself from a soldier recovering from the wounds of war to an internationally known spiritual leader and philanthropist.  As he healed from his wounds and the primitive medical operations that followed,  Íñigo made a lengthy journey for a man that would bear a limp from severely broken legs to the mountainside monastery of Santa Maria of Montserrat from the shores of the Basque region.  After experiences within the monastery, the soldier found his calling in the life of different service.  Descending from the mountain,  Íñigo took service for a local hospital in Manresa in trade for food and lodging.  When not tending to the ill,  Íñigo would meditate in a small cave at the between the hilltop town and the river.  There, these meditations would deliver Ignatius to write the founding documents of the Jesuit Order - the Spiritual Exercises. 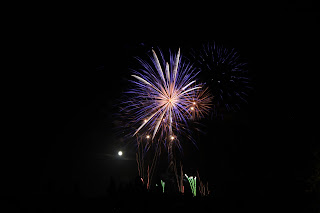 All of this history is what drew me to want to visit Manresa for three days.  I had it penciled out where I would arrive in the city in the afternoon of one day.  The following to visit the Montserrat monastery, and the third to check out the cave and then continue on my way to Andorra.  I ended up staying in Manresa for five wonderful and life-changing days.  I will never be able to thank my host Geraldine for all that she did for me.  I have always been an advocate for travel for everyone to discover what is beyond the horizon.  Although, here in this picturesque city of Catalunya, my take on travel has forever changed.  Travel is more than seeing wonders of nature, beautiful buildings created by the works of mankind, or getting an adrenaline rush from adventure.  Travel is about people and the experience of meeting a new culture, a new family, and a new idea of yourself.  The memories that this curly-haired, beautiful soul gave me will be timeless treasures and some of the happiest moments in life as I have discovered more about the simple truths of a happy life.  When I arrived, her bright smile and warm spirit gave me a regal welcome to a place I have been waiting to explore for years.  Even though I was anxious to get out and explore, I was more than happy to sit at her table and share stories over the quiche we had made together that afternoon.  Then, as if we had been life-long friends, ventured out to go watch the opening ceremony to the multiple day of festivities celebrating Catalonia. 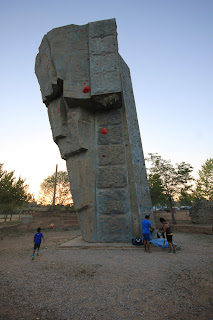 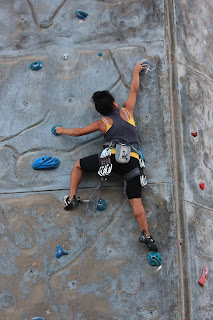 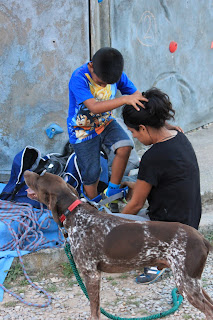 In all of my travels, I have stayed with many great people from Virginia to Malaysia through CouchSurfing, but of all of them, my stay with Geraldine was the most impacting on me.  I felt as if I became a brother and an uncle in her family.  During my five days in Manresa, I never felt like I was a tourist being I was taking part in adventures that were spontaneous as if I lived there.  I find it hard to rate, but one of the best evenings we had was the afternoon we went to rock climb.  While Geraldine and her brother were setting the lines, Ethan and I attempted to play soccer while the pup herded the ball around the field from us.  After we all made our scramble up to the top of the wall, we set out to watch the firework show after the sun had set on the cool grass of one of the city's parks.  After they had shared their passion of climbing with me, I as able to share one of mine with them and that was photography.  Ethan watched with excitement in his eyes for when the LCD screen on my camera would show the image of the firework that had just burst in the air with a longer exposure.  In these moments, I saw the same curiosity in his face about photography as I did years before when I stepped under the vaulted ceiling of a mission church on the other side of the world from that park under the starry sky in northern Spain.  That, I feel is the power and the beauty of travel and hope all get to understand the feeling in their lifetime.
Posted by t_mork at 3:07 AM