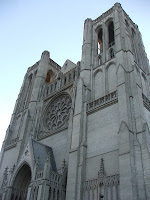 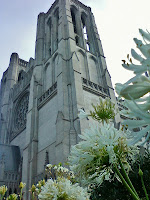 Looking back on every trip that I made to San Francisco, I visited this place and each time saw something that I had not the times before!  Centered on top of one of the highest points of the bay city and one of the most historical districts, Nob Hill, as well.  A little bit of history on this now cathedral, it was founded in the year of the Gold Rush - 1849.  Then, just a small parish later grew into the Grace Church.  Following the catastrophic earthquake of 1906, plans to build a cathedral for the Episcopalian Diocese were in order by the help of the Crocker Family. 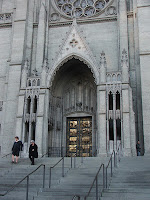 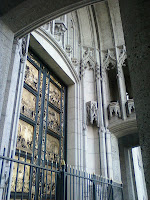 Of all the works of art housed in the Grace Cathedral from the murals of De Rosen to the stained glass windows, my personal favorite are the Ghiberti doors.  On the western entrance beneath the two bell towers stand these amazing doors.  Known as the Gates to Paradise, this replica was made from the Florence Baptistery, although the original doors have their own unique history as well, they are now keep on display instead of serving as doors.  The doors to the Grace Cathedral were installed just before her dedication in 1964, adding to the "Grand" opening. 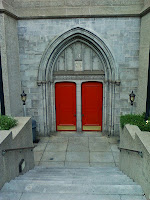 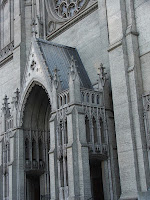 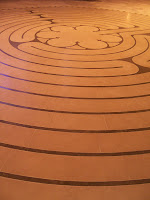 Following true to the French Gothic design, I always felt as if I had fallen into the streets of Europe when I walked up to these walls.  Standing as the third largest Episcopal cathedral, the Grace holds within itself numerous articles of history and art, along with providing peace and sanctuary.  One way to meditate is to walk the lines of one of the two labyrinths, one inside the nave and the other at the base of the western facade. 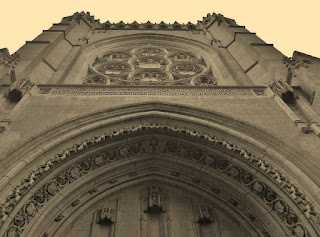 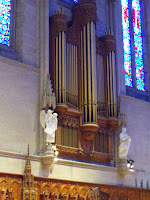 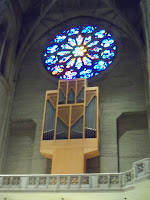 These pictures here are taken from my seventh visit to the Cathedral and each time I go I learn more and more about the Cathedral!  This time, I was fortunate enough to meet with one of the five organ players for the cathedral, ironically enough her sister lives in Butte, Montana!  She explained to me that in the Cathedral that there are three organs. The Organ pictured to the left is the Alexander Memorial pipe organ, and here show a few of the 7,500 pipes to this Organ alone!  This here on the right is a secondary organ, a newer Aeolian-Skinner Organ later added to the Cathedral to fulfill the collection among the Alexander Memorial and the 1862 William Davis hand-pumped organ.

The Grace Cathedral is mostly made out of concrete despite it's exterior appearance of stone.  The reason behind the building material and style is to withstand the effects of earthquakes, and with careful design and construction, this structure is able to flex and shift with out damaging or more importantly toppling the Cathedral.
Posted by t_mork at 4:11 PM