Panoramic view of Zürich from the eastern tower of the Grossmünster. 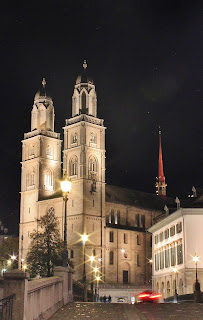 My visit to Zürich can be labelled with carpe diem to the nth degree.

Once I made the trek to my host's hillside apartment from the bustling central station, my journey about the alpine lake city began!  I did not really plan to spend very much time in Switzerland being I had dedicated most of the trip to exploring Italy, but it is amazing what can be done in the matter of a single day's time!  After taking in the view from the plaza overlook of the ETH library, I made my way down the web of staircases down to the banks of the Limmat.  I could not have asked for a more pleasant evening to be walking along the tranquil river walk in the heart of Zürich.  The night was as crisp and clear as the star-studded sky above as I trekked about the cobble stone streets filled with the ever-so-sweet smells of chocolates and Swiss cuisines of every liking!  As I stood at the stone railing overlooking the Limmat on the south side of the Rathaus setting up for a night shot, I was taken by surprise as swans passed by at an effortless stone's throw and just in time to capture them in a shot with the Fraumünster Church. What more could I have asked for on my first night of my second European tour, you might ask?  How about a flat-bottom boat leisurely floating down the river with a live band because that is what happened!  Not only was I feeling a sugar rush from the twenty Swiss francs worth of chocolate I devoured but the mere euphoria of this city had my heart racing and my wanderlust peaked.  All the excitement set aside, I did take some down time from the vantage point of Linderhof park for a few minutes and admired the hill that I had to hike up for that much needed sleep and recover from jet lag that I had been too busy to realize I had! 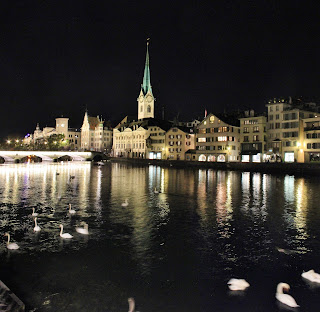 Once recovered and refreshed, my hostess Marti made me a cup of stout coffee and a light breakfast as she gave me a long list of things to do on my daytime endeavor!  By the advice of Marti, I found myself at the massive bronze doors of the north portal into one of the most significant places to the Swiss Confederacy.  The Grossmünster today dates back to 1100 and twin towers are said to be the most recognizable landmark and lasting treasure of Zürich.  Stepping into the ancient halls that Huldrych Zwingli once walked to preach his word to the citizens of Zürich that led to the Reformation of Switzerland.  The historical value set aside, the adventure of winding up the winding maze of stairs up to the south tower to the panoramic view was priceless!   I highly recommend paying the two francs to make the climb of the 187 stairs to the top for the best view of "Downtown Switzerland".  Another must-do of Zürich is to taken in the sweet aroma of all the "Schokoladenherstellern" or chocolatiers and if I had to recommend one, that would be Läderach and the picture below says it all! 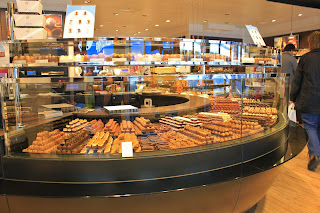 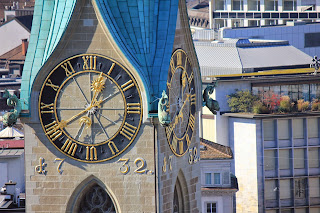