View from the Train - Western Austria 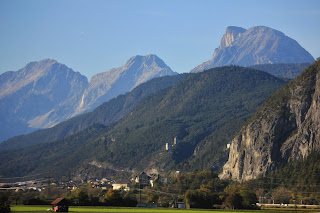 After spending two (very short but fun-filled) days in Switzerland, the time came for me to traverse more the Alps, but this time through the "Eastern Realm" that is Austria.  My trip was split between the Swiss train and Austrian train systems at Buchs, Switzerland.  I was afforded nearly an hour of wait time to explore around Buchs where I walked about the beautiful neighborhoods and the quaint downtown area.  While meandering back to the station I came to a bridge with the four flags of the German speaking countries.  I wish I had looked at the map more attentively for on the other side of that bridge was the Principality of Liechtenstein, more so the capital city of Vaduz as what I had laid out in front of me!  I did get to go to Liechtenstein though even if it were just a train ride, I can say I have been there!  Once I returned back to the station, I stepped on board the Österreichische Bundesbahnen or more commonly seen as ÖBB's RJ train.  For your information, "RJ" stands for 'RailJet'.  I whipped across western Austria at speeds up to 140 miles per hour (230km/h)!  I started to contemplate the questions of life and death as the train wrapped around bends looming over drop off cliffs below, but nevertheless, Alpine Engineering pulled through with my survival!  I had been through the Bavarian and Swiss Alps, but what Austria holds in her borders are mountains unlike no other!  When I arrived to my Austrian lay-over destination of Innsbruck, the looked in awe up at the curtain of a sheer rock wall that fortified this ancient alpine metropolis.  Everywhere that I could see from the train, the valleys with their small towns are locked in by the staggering heights of the peaks above.
Posted by t_mork at 11:13 PM