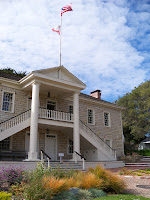 Monterey - A city of many "First's".  Monterey is home to Colton Hall and remains to this day the home of City Hall offices of the city.  The hall housed the first Constitutional Convention in the American State of California.  It was at this convention that the delegates of the then-districts drafted and ratified the first Constitution of California.  Considering that the hall was built in the 1840's, I find that fact amazing that the building remains in the condition that it is in despite the 150 years worth of devastating earthquakes surrounding the peninsula.  Then again, architects and engineers at that time labored hard to make sure these important structures would stand the test of time and elements. 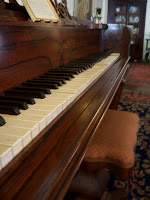 Housed in the Casa Serrano in downtown Monterey which is one of many free venues that is offered in the city of Monterey and a valuable place to visit being the guides to this museum are also members of the Monterey Historic Society and can give you the In's and Out's of Monterey's History!  This piano here has a very unique story.  First of all, it is made by the prominent company of Chickering that was based out of Boston, Massachusetts, and traveled all along the coasts of North and South America, around the Cape of Good Hope to the City of Monterey, and can still be played to this day after more than 150 years! 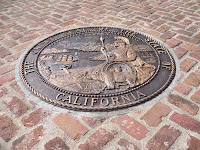 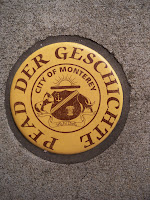 Embedded in the walkway up to Colton Hall, this bronze marker of the Seal of California is about three feet across and welcomes visitors to this historic location.
The Path of History winding through downtown Monterey is benchmarked by these small plaques embedded into the sidewalks for visitors to follow.  This markers are written in some of the world's common languages: English, French, Spanish, German, Chinese, and Korean.﻿﻿
Posted by t_mork at 12:16 PM