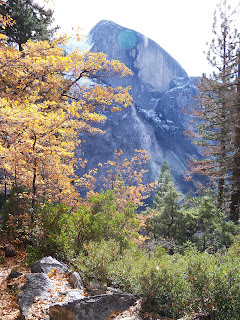 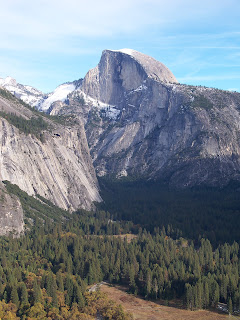 Climbing 4,740 feet out of the Yosemite Valley bottom, the Half Dome is one of Yosemite's most notable attractions.  Up until 1875, this was considered to be "perfectly inaccessable", that is until George Anderson proved otherwise by making the first climb to the summit of this Monolith.  I, too, hope to make that same hike here in the near future!

While hiking along the North Ridge of the Yosemite Valley, this was a common site for me
to look upon while making my way across on my Journey.

I have to admit, going in the mid autumn season is probably one of the best times to go due to the beautiful display of colors, slight snow, and the ability to enjoy it with a reduced amount of park visitors!

A glimpse of the opposing Domes: North Dome and the Half Dome
Posted by t_mork at 9:56 AM