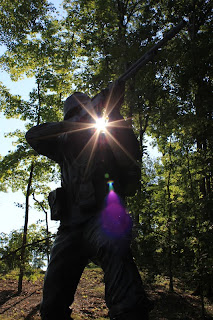 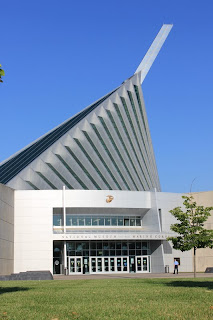 The design behind the museum is to invoke the representation the valiant Marines which raised the American flag on Iwo Jima in 1945, one of the most hallmark moment of the history of the Corps.

What I like to call my million dollar shot is on the right.
Set in the center of the park, the Fallen Marines of Vietnam is both inspiring by the courage these young combatants displayed on foreign soil yet pain-staking to know the sacrifice which they made was ultimate.

Walking through the Semper Fidelis Park was a chilling experience walking under the ash and birch which shade the Names of the Fallen paved into the trail throughout the 135 acre park surrounding the Museum.

There is an interesting history to this statue.  As a project commissioned by General Pershing of the Army to have this sculpture made after the end of World War I by a French sculptor.  Although the Frenchman did not know how to differentiate between the American services and used a Marine as a model of the statue for the Army!  Nonetheless, the Army would not accept the statue due to the stubbornness of the sculptor to not alter his work, after a combined effort of the Marine Corps, they purchased the statue. 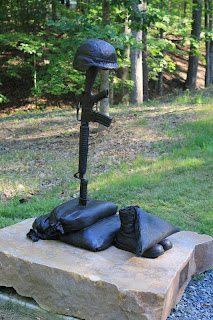 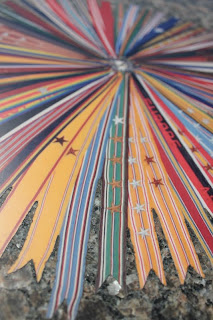 The 54 streamers represent the History and the Accomplishments of the United States Marine Corps from as early as the American Revolution to the Campaigns in Afghanistan and Iraq.

"For love of country they accepted death"
James A. Garfield
Posted by t_mork at 9:17 PM