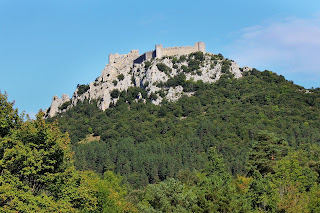 While I was planning my route to both make bicycling tolerable but to also see as much of the world as I possibly could.  In doing so, I spent hours pouring over books and surfing through webpages of places, cultures, and histories of the potential pauses during my pedaling adventure.  One evening as I was skimming through one of many "things to see in Southern France" pages, I stumbled upon the Cathar castles.  Piquing my interest, I opened a few additional tabs to learn more and within a few minutes I knew I would be adding one of the historic fortresses to my list!  But which one was the question I had to answer.  Looking through the lineup of châteaux, I was most intrigued by Château de Puilaurens and it's significance in history dating back to the times of the Roman expansion westward.  As the legions marched westward along the coast through Gaul, modern day France, to pave the way of the first Roman road to Hispania or Spain as it is known today.  The spur of stone that the chateau sits upon today served as a castrum to the first Romans to arrive in the area.  Here, the challenges of passing over the Pyrenees pushed them to settle the area before pushing onward to the southern territories.  After the fall of the Roman Empire, this fortification has played strategic roles in the rise of both the Kingdoms of Spain and France for nearly a thousand years. 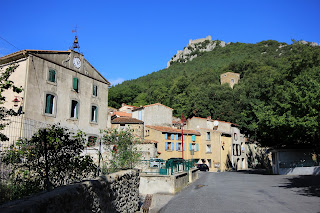 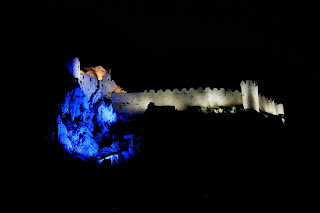 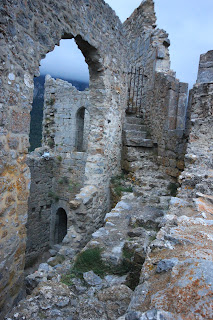 By the time I arrived to the valleys that this ancient citadel looks over, the gloom that I had been enduring for the first three days in France finally started to lift.  Arriving to the petite village of Lavagnac cold and dripping wet, all I wanted was something warm to drink in hopes of bringing life back into my frigid body.  Fascinated by the beautiful stone train trestle that weaves through the provincial homes, I followed the main road into the heart of the community and lucked out with discovering a charming teahouse.  Entering through the door I was questioning if I truly wanted to spend the night in my tent with the weather as it was but the smell of tea leaf and herbs took away my worries temporarily.  Once I got my frosty fingers on a warm cup filled with tea, the lady of the house asked me what brought me to the area in heavily accented English.  Smiling and in my best attempt in French, I responded "to see the chateau nearby".  I followed up with questions such as how far away it was from the teahouse.  She looked at her watch at her wrist and then bobbed her head to look through the front windows, smiled and then told me to enjoy that cup of tea first and then she would show me.  Once I finished the last drop, she took me out and with a few steps over to the bridge, she pointed upward and said, "There.  There is Château de Puilaurens!"  The view I was taking in is the same as the image below and boy, was my heart happy that the fortress was not too far away and that the weather was improving beyond the dismal deluge I had been enduring!  She led me back to the shop while pointing out a few of the other features of the area and poured me another cup of tea upon our return. 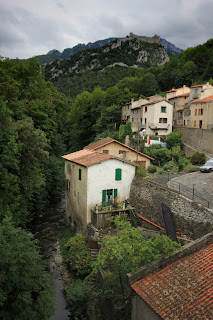 My inner adventurer had been recharged and was ready to go experience this unique piece of culture, history, and architecture.  I made a quick change into a dry set of biking gear before setting off southward to find my site to set up my tent for the night and to hopefully get a closer look at the bygone keep.  My road bent with the curves of the tumbling river nearby as I inched closer and my heart began to race with wonder!  Soon, as I found the roadside signaling the way up to the castle, my legs were starting to feel the climb!  Just as the burn was starting to heat up in my calves, I came upon the perfect spot to call home for the night.  There was an opening in the trees that looked up to the fortress with the most ideal ground to pitch a tent.  After setting up, I decided there would be enough light to venture upward to see how close I could get to the chateau.  To my surprise, you can walk in to the ruins!  Checking out the old walls and towers, I sat at the edge admiring the villages below as the sun went down behind the cloud-covered horizon.  When suddenly, I heard a popping noise below me.  Curious as ever, I looked over the edge of the precipice I was sitting on to see that there was a floodlight and the water drops were "boiling" off the glass!  Excited to know that the castle would be lit at night, I began my descent to find the perfect spot to capture the Château de Puilaurens in the dark of night.  While I made the final adjustments to my camera to snap the night shot, I looked up to the blue and golden hues cast onto the walls and smiled.  What a great way to end a day that had begun with dreary weather and doubt in this endeavor I was putting myself through.