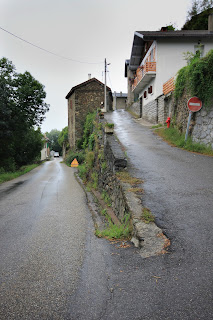 When I began my bicycling in southern Spain, I knew I would face challenges along the way.  From flat tires in the middle of nowhere to being lost in metropolitan cities, I thought I had seen it all by the time I crossed into la République française.  I was wrong.  All those hardships and struggles were puny compared to my 'Tour de France'.  When I started out on my ride that day from my hostel in Tarter, Andorra, the sun was playing hide-and-seek behind clouds.  As I neared the French border, a fog loomed over the series of switch backs I had to climb.  Nearing the crest of the pass, that fog was more of a freezing mist of tiny spears.  But, France was in sight - figuratively!  I knew it was there - a sign told me so!  There was one last Andorran village before passing the border into France and there I found a cafe to hopefully get my frozen hands on a cup of creamy hot chocolate.  After warming my body and spirit, the time had come to officially cross into France.  Now, rewind a few days to when I rode the bus into Andorra la Vella from Spain and my conversation with the lovely lady in the tourism office.  I had asked her if she could or knew someone that could stamp my passport with an Andorran stamp.  She was unable to do so but inquired about my route and when I said I was going into France by El Pas de la Casa.  She grabbed my arm and happily told me that I would be able to get both the Andorran and French stamps at the customs when I passed through on my way.  My spirits lifted by a few large cups of hot chocolate and a warm meal, I was ready to get those stamps and explore France!  As I wheeled up to the French customs station, which was in place mostly to control the traffic of non-taxed cigarettes and alcohol at discount prices in Andorra into France, I kindly asked the group of custom agents where I could get stamps for my passport.  One agent stepped toward me and told me that they cannot stamp passports being that day was a Tuesday.  I thought to myself on how ludicrous this was but it only got better!  The agent then snobbishly asked me where I was going so I returned an answer in sarcasm to match his, "France."  He retorted with a question "anywhere after that?" which I responded with Switzerland and Germany.  He proceeded to inform me that I would be able to get an Andorran stamp when I get to Germany.  Frustrated, I forced a smile and said my thanks to the group and continued on.  The ride was downhill from there.  By that, I mean in a literal sense as well as the experience of my first taste of France. 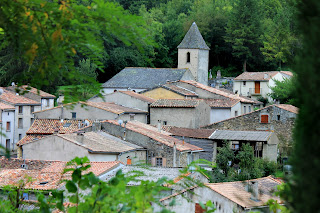 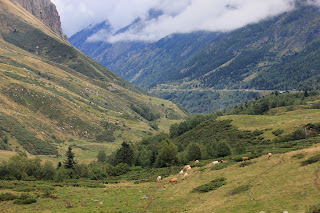 After I left the customs station, the mist had upgraded to a full rain.  The shoulders that Spain and Andorra had allotted bicyclists such as myself to safely ride on had vanished.  As I hugged the edge of the narrow roadway, I was scared off resulting in my cart tipping and spilling my stores of apples and snacks when a passing Frenchman blared his car horn at me as he sped downward.  This was just the first ten minutes of my journey.  From my planning months in advance, I found a quaint camping area outside of the village of Ax-les-Thermes.  I had the directions handy in case I needed some guidance along the way.  Soaking wet, cold to the bone, I had arrived to Ax-les-Thermes and found the most confusing convergence of bending streets at two traffic circles with a sign that labeled destinations but gave no indication which way they were.  Being the signage was of no use to me I thought I would get some local assistance.  In reference to the Wizard of Oz after about my fourth attempt to get help here, I mumbled to myself "Trevor, we're not in Spain anymore!"  A little bit on the frustrated side, in the most polite voice I could muster, I asked an elderly lady which way was to Goulours in my basic skills from my French Handbook.  I was ignored.  I quickly thought to myself that Spain is right over there so give Spanish a try!  Still nothing.  Finally, at my wit's end, I gave my humble request in German.  That caught her attention and then asked for my question again in French.  Once I got out my inquiry again, she lifted up her hand and gave it a loose wave in the easterly direction and then continued on her way.  Taking the most dramatic deep breath, I pedaled onward in that general direction in hopes of finding my destination.  Subtly cursing to myself as I made each switchback uphill, I encountered an older man on a jog in the rain.  He was smiling at me as we approached each other and I initially thought "how strange.... happiness."  He eagerly greeted me which was a small ray of sunshine on this gloomy day.  After the greetings I asked him if I was on the right way to Goulours in Spanish which he brimmed in more happiness, confirming I was on the right path and that I had great Spanish (for an American).  He told me that he was from northwestern Spain and asked about my journey thus far.  After a few minutes of conversation we parted ways but before we did, he told me that I would come a place where the road would split around a house (pictured at the top) and that I would stay on the downhill side and my ride would be beautiful from there on!  Little did he know, he was the factor that made all that misery that I had experienced fade away despite that I was drenched, hungry, and ready to quit.
Posted by t_mork at 12:58 PM