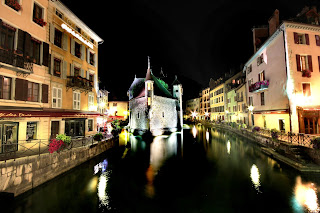 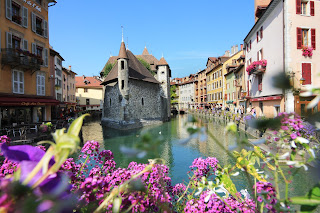 I discovered the beauty of Annecy while I was trying to coax my mind into letting me sleep and I was scrolling through Facebook when one of the suggested ads popped up with "the ten secret places of France".  I ran the risk of this ad being click-bait and I am glad that I did!  One place hooked my attention from the list and that was Annecy.  Luckily, this lakeside city was an easy addition to my route across the European continent toward Munich for the opening ceremony of Oktoberfest.  The 18th of September being 12 days away and the entire country of Switzerland to traverse by bike and occasionally train, I needed to get to this lakeside paradise quickly so I thought I would hop on a train from Avignon to Annecy.  After my early morning ride from Nîmes with my side stop at the Pont du Gard for a few hours, I arrived in the old papal city of Avignon with a few close encounters with French traffic with a sigh of relief.  Crossing the mighty Rhône river, I followed the signs guiding me to the city center and more importantly the Gare or main train station.  I parked my bike in front of the 19th Century train station and ventured inside to check the schedule for getting to Annecy.


Skimming the board, it looked like I would be  departing a little after 1500 which gave me some  time to explore the city and more importantly get lunch!  I chose the 3 PM departure time being the ride to Annecy would take about three and half hours and that would allow me time to find a place to stay and cruise the canals and shores of Annecy.  So I thought!  With a few hours to hit the historic spots of medieval Avignon, I began cycling around on a hot, sunny day at a casual, carefree pace over the cobblestone streets up to the Palais des Papes (on the right).  I found a small street cafe that caught my attention from their display of massive cookies and settled in at a table to regain some calories and people watch before heading back to catch my train.  Remember when I said that this ride would be about three and a half hours?  Somehow it ended up being nine hours.  I was aware that I would be changing trains in Lyon but when I disembarked from the first train, I scoured the station in search of the information board to get to the platform for my second and final leg of the trip.  The ticket in my hand denoted that the second train would be leaving in about 35 minutes after my arrival thus I wanted to find the platform sooner rather than later.  Trailing my bicycle through the station to the assigned platform, I looked up to the marque and grew confused at the next incoming train.  Confused, I saw a station official and asked him about my train and if I was at the right platform - along with all the other crucial questions a concerned traveler would ask.  He squinted at the marque and then told me that incoming train was running late and in turn would make my train late "by a few minutes".  Those few minutes ended up being an hour and forty minutes until it would arrive in Lyon! 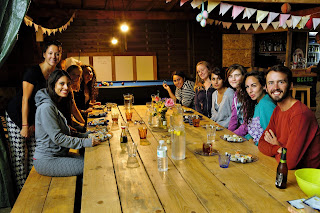 Then we would have to wait in the station for an additional 40 minutes before taking off to only have more delays.  My arrival to Annecy was significantly later than I had wished but luckily one of the hostels was still taking in travelers.  Weary and worn, I finally found the hostel and was welcomed by a staff from around the world!  I had intended on spending only one night in Annecy but once I saw they were going to be having a sushi night the next evening, how could I not extend my stay by an extra day?!  Needless to say, I am glad I made that decision for I was able to witness this enchanting city filled with flowers, medieval markets, and beautiful people with the time that that this city deserves!  ...and of course - SUSHI with a group of great people from all around this big world in the "Venice of the Alps"!