I am not too sure when I truly first fell in love with architecture followed with engineering, but I do recall when and where I first discovered the wonder of the Pont du Gard.  My parents had a 30 volume collection of the 1954 Encyclopedia Americana as part of our family library.  Sifting through the pages admiring the maps and images as my older siblings referenced from these pre-internet resources, I was able to travel the world with each turn of the page with my carefree 'research' as I was not in school yet.  Arriving to the pictures of this place, I was piqued.  Heaving the hefty book up the stairs to my parents, I wanted to learn more about this place.  Skimming the information, my dad converted the encyclopedia jargon into comprehensible material my four or five year old mind could grasp.  I was having difficulty getting just how tall the 'water bridge' was and then my dad leaned over the book and set his hand on my head.  He then asked me to imagine how tall I would be if I stacked my standing body on top of itself 50 times and that is about how tall the Pont du Gard is.  My little eyes grew larger as I tried to fathom this massive place as my attention drew back to the page with more inquisitive passion.  I could attribute this experience to being the handful of snow that started the snowball that has been my life of travel, love of architecture and engineering, and the continued journey of learning. 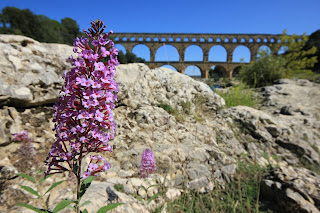 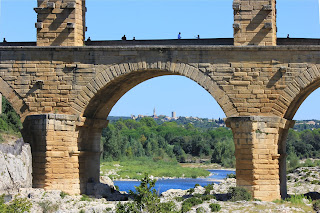 To this day, this aqueduct captivates my wonder and imagination.  As a student of engineering in the modern world with the technology we have access to today, my mind is boggled as to how the designers and engineers of this particular aqueduct system were able to build this wonder of the ancient world and still a wonder two thousand years later.  The credit goes to Marcus Vipsanius Agrippa.  Considered to be one of the greatest minds of Roman engineering as he laid out near perfect road ways across the expanding empire, integrated state-of-the-art municipal sewer systems, and of course, aqueducts to serve growing cities, all of which are still functioning to this day!  One of the most recognizable structures of his craft is the Pantheon in the heart of Rome.  The design was his, however he did not live to see the completion of one of the world's greatest engineering feats.  Other honorable mentions of his include the Maison Carrée in the city of Nimes, the reason behind this aqueduct, and extensive Via Agrippa of over 21,000 kilometers of roadway were created by his one man.  Coming back to the Pont du Gard and the 50 kilometer aqueduct system that it stands a part of the intriguing fact that over the entire length of the system, it only drops 12.6 meters!  Expanding out the overall length to 50,000 meters of channel for water to flow without being pumped or forced, these builders were able to wind a (mostly) leak-proof channel to the 50,000+ citizens of Nimes and only dropping elevation of 12.6 meters!  In order to do so and with the little elevation difference between the source and the destination of the water, the Romans had to overcome the Gardon gorge.  That challenge was resolved with the tallest Roman aqueduct at a height of nearly 50 meters and requiring three tiers of arches to support the near nine million gallons of water the aqueduct provided to the citizens of Colonia Nemausus.  With credentials like that, I would rank the Pont du Gard in the top three of the Roman structures remaining today as marvels of engineering!
Posted by t_mork at 3:02 AM