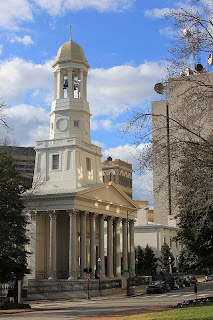 Richmond is most definitely a city that you can walk around for three days and still not see most of the city! Voice of experience speaking!  I must recommend the Capital area for it holds alluring architecture of the old city life mixed in with quaint cafes and energizing night clubs.

Throughout the hills and along the boulevards stand memorials to the forefathers of the United States of America.

Contradicting edifices such as the Old City Hall (left) with it's Gothic Revival spires and tri-set windows next to the lily white walls of the State Capitol and it's Italian Renaissance columns and simple Palladian adornments.


Designed by the third President, Thomas Jefferson along with Charles Louis Clerisseau in 1785 and now is the second oldest state capitol in the United States! 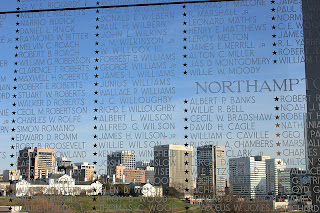 The Richmond Skyline seen through the Memorial to the Fallen Soldiers at the Virginia War Memorial.  I wish I could have gone in and toured the visitor center and further explored Virginia's history, but maybe next time!

The Landmark Theater, often called The Mosque by locals for it's Moorish Revival.  The Landmark was originally the Shriners Temple until the 1940's and now serves as a local venue of arts and theater to Richmond.

If anyone needs a lesson on the American Civil War, just walk down Monument Avenue.  I joked around after about the fifth massive statue we came to with the comment


"You think that the Confederates had won the War with these statues...