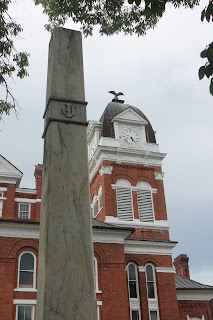 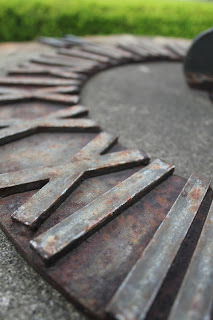 Named in honor of Mr. M. Saunders, who built his general store at the intersection of two major Indian trails in central Georgia.  The community of Saundersville was established in 1796 and later incorporated as Sandersville in 1812 as the county seat for Washington County, the tenth extablished county of Georgia's 159 counties today.

Passing through on my way to Columbus, the county courthouse is what caught my eye (top row left) and I justified pulling over to 'stretch my legs' for a bit - and I am glad I did!  I think I happened to stumble upon one of Georgia's hidden treasures again by accident!  As an easy walk around the quaint downtown area, any visitor can take in the antebellum mansions that Sherman spared on his March to the Sea at the end of the American Civil War.  The white one up above on the left is my personal favorite.  I would not mind having a portico and deck like that one someday!  Since it's founding, the area has been dependent upon agriculture, but with the more recent discovery of kaolin, a white clay mineral, the mining industry has boosted Sandersville's economy once again! 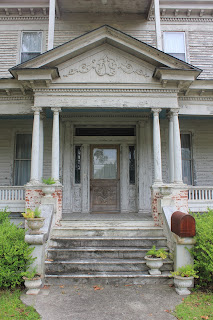 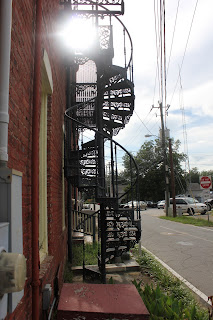 I would love to have toured this old house that has once again been taken under someone's wing and is being remodeled and refurbished.  The wrought iron staircase outside of a local coffeeshop is more of a piece of art rather than a staircase to go up to the living quarters up above in the quaint little downtown!
Posted by t_mork at 5:50 PM