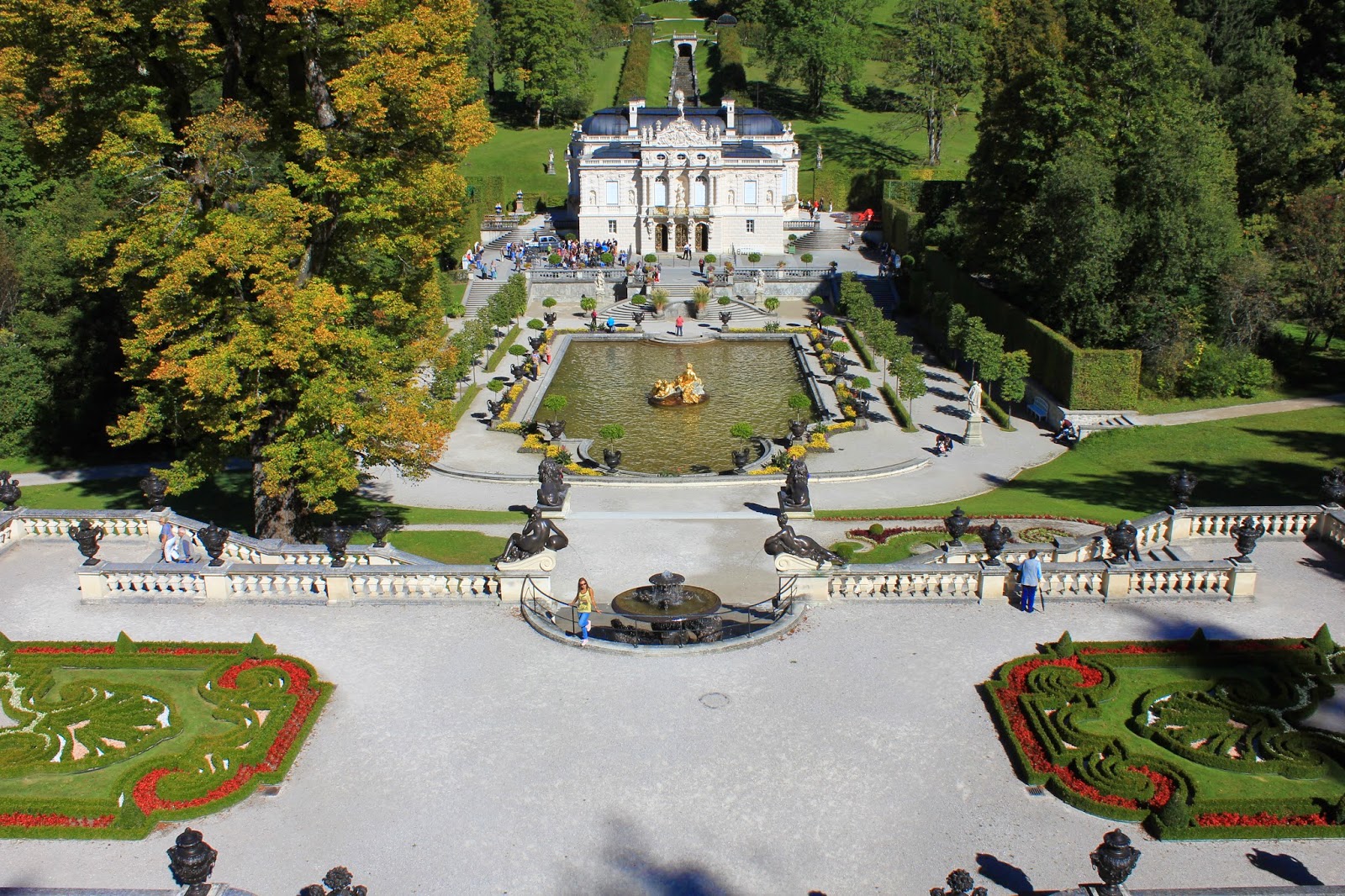 The saying "great things come in small packages" rings true for the splendor of Linderhof.  This was one of the dreams of King Ludwig the Second of Bavaria and the only one of his three palaces that he saw completed in his lifetime.  Fashioning this snow-white palace of Versailles grandeur on the grounds in which Ludwig's father took him hunting on as a child in the Bavarian Alps, Linderhof is a masterpiece of a mastermind.  As the palace came into my view as I walked up the path to the gardens, I was a bit surprised at the size of the palace at first glance.  Ludwig wanted his palace of Versailles, but not of the size of the original.  He wanted to keep a warmth and coziness to this palace more than expansive wings with empty, cold halls, but still grand nonetheless!  From a distance, the exterior appeared to me to be simple, however as keeping to the ways of Rococo style, extremely detailed ornamentation covers the entirety of the palace as you walk through the entry ways into the home of King Ludwig.  Naturally, no photography was permitted inside of the palace, so I got my money's worth by asking the unsuspecting tour guide with complex questions so myself and my fellow viewers could have a few more moments with the priceless antiquities and artwork within each of the four rooms with a "functional" purpose.  Aside from the ornate decorations of the palace, some of the features we take for granted in today's age were some of the more intriguing marvels of Linderhof.  In example, the "air conditioning" system utilizing one of the mountain springs above the palace channeled to bring the water down to the Neptune fountain on the north side of the house.  From there, the water is circulated through a series of pipes underneath the palace to produce cooler air which is then pushed up into the rooms above via fans powered by the running water.  That water in turn keeps heading south and exits as an 80 foot geyser in the water parterre on the south side of the palace every half hour during the warmer seasons. Aside from having an automatic fountain and air conditioning, the genius creation of the "kitchen elevator" was not only brilliant but very considerate to his staff.  The dining table was set upon a platform that could be lowered into the kitchen down below, set with dinnerware and the preparations, then lifted back up for the king to eat his meals in peace without any interruptions.  Not only could the Swan King find peace in his dining room, but also the extensive gardens to include the grotto in which he hosted private concerts and plays in as well, mostly those of his admired Wagner!