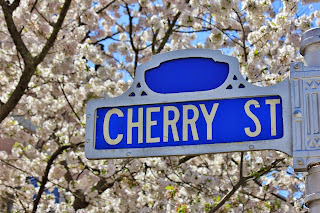 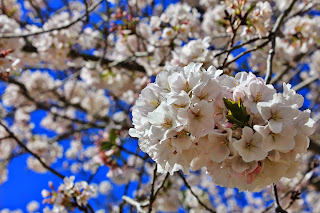 As I was passing through middle Georgia on the back roads on a summer day, I made a stop in the city of Macon to grab a quick bite to eat and was rapt by the charm and allure of the Central City.  I stumbled upon a local Greek restaurant which happened to be on the corner of Second and Cherry Street.  I did not think to much of the name while going into the restaurant for acquiring food was the priority at the time!  While getting my fill of a fantastic gyro and a Greek beer at my window seat, I noticed the large pink flowers painted all along the sidewalk.  When my server stopped by, I inquired on the street art and she began with a big smile then said "It's from the festival, and if you can, it's worth coming to in the spring!" As a dutifully member of Generation Y, I grabbed my cellphone and Googled about the "Macon cherry festival".  To my surprise, the city is known as the Cherry Blossom Capital of the World and for good reason!  Each spring, the Central City is filled with various hues of pink blossoms of more than 300,000 Yoshino cherry trees! 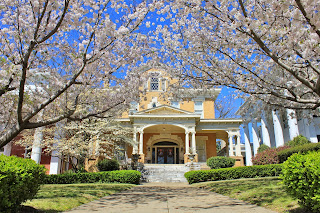 I made a keen note to make the trip the following spring to the festival to see the city in blossom.  As I made my way from Milledgeville to Macon along the Old Garrison road, I was amazed by the entire city brimming in blossoms ranging from nearly white to as bright as fuchsia!  I came to the festival with intentions of seeing the cherry trees around the downtown and "up on the hill'" as the locals call the area around Coleman Hill park, but found much more!  Quickly realizing that most of the downtown had been blocked off for events, I had to investigate hustle and bustle.  Concerts, local made crafts, artwork display one after another, children's activities and dancers filled the streets of pink meanwhile my favorite part of the festival filled the air with enticing aromas - Food Stands.  The cherries of Macon can be traced back to one man by the name of William Fickling.  On a visit to Washington D.C., Bill noticed that the trees all about the National Mall resembled that of his backyard grove.  Upon his return to Macon, he started to expand his humble collection of cherry trees.  Grabbing the attention of new resident to Macon, Carolyn Crayton, she approached Mister Fickling about getting some trees for to fill her neighborhood of Wesleyan Woods with these beautiful trees was the figurative seed planting of the Macon Cherry Blossom Festival.  After Fickling's donation of 500 Yoshino trees to Carolyn's neighborhood, she sought to honor and thank him.  She did so by hosting a three day event the weekend of his birthday which happens to occur during the blossom in 1982.  The citizens of Macon loved the weekend of festivities of a mere 30 activities on the grounds of Wesleyan College and thus started the festival officially in 1983.  Today, the festival spans over ten days and is the host to more than 500 activities for all ages and interests! 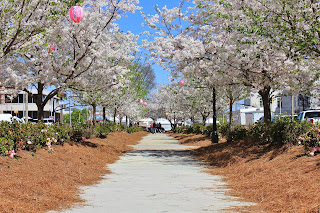