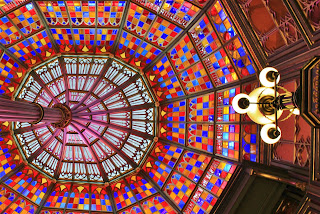 As part of my goal to see all the state capitol buildings, I subjected my two friends to going on a side trip before we made the trek back to Georgia.  At this point, I have toured seventeen of this nation's government houses to also include the historic ones such as this one and I will admit, the Old Capitol of Louisiana is one of the most beautiful that I have opened the door into!  Entering from the north door, I was showered with rich colors from the stained glass dome spanning high over the spiraling staircase.  I had quickly learned in New Orleans that the people of Louisiana are a bright and vibrant people that also celebrate their history and a sublime example of that is the resplendent Gothic styled Old Capitol.  Surrounding the railing of the last few steps stand the fifteen flags of the states that were part of the Louisiana Purchase, to include my homestate of Montana!  Serving as a museum today, the Old Capitol holds a tremendous amount of the Pelican State's diverse narration of history. 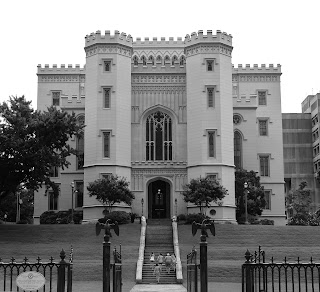 After learning that the decision to move the capital from the metropolis of New Orleans in fear of power concentration and corruption in the 1840s that the "Red Stick" was chosen to house the seat of government for the Bayou State.  One can say that Baton Rouge had "bloody" beginnings, for that is where the name of the modern city was derived.  When the earlier French explorers ventured up the waterways of the Mississippi under the lead of Pierre le Moyne Sieur d'Iberville, they came upon poles stained red from the adhered carcasses marking the boundary between to the two tribal nations of the area.  That exhibit is a fairly detailed exhibition, so take heed!  As a disciple to architecture, this building held many rewarding features beyond the dazzling dome and grand staircase.  Learning about the construction of the structure depended largely on cast iron came to a surprise to me due to the ungodly high humidity and the likeliness of cast iron to rust.  In addition to that, while being used as a garrison for the Union "invaders", the building caught fire twice and remained standing.  Before the turn of the 20th century,  great renovations and alterations were made to the Capitol, namely what is the focal point today: The Dome and Staircase.  But, after Freret finished his work in the "old castle" in 1882, the building would be decommissioned from political service as the new towering capitol to the north half a century later.
Posted by t_mork at 4:43 AM