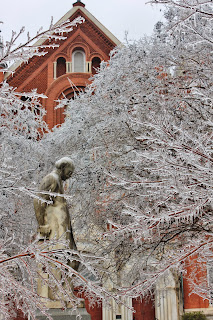 Pax, the given name to the crippling winter storm that struck the eastern half of the United States from the 11th to the 17th of February, 2014.  Not two weeks before this cyclic storm made landfall, the American South had faced the effects of a polar vortex colliding with a storm over the Gulf of Mexico.  The results of the first winter storm nearly paralyzed most of the Deep South by cutting off millions to electricity and coating much of the sub-tropical region of the American nation in ice.  Of my four years of living in Georgia, this was an entertaining week from my native Montanan perspective.  Although, I will admit, these storms were treacherous in their own right, the South is typically not prepared for such weather situations and on a normal day often struggles with common driving skills, but throwing a slick layer of ice into the mix results in utter chaos.  After the brute of Pax had passed, my friend Kristin and I ventured out into the post-"Ice-pocalyptic" Augusta to see what damage had been done.  The freezing rains unyieldingly brought down trees and overhead lines which left large portions of the region in the dark, but out household was fortunate enough to only be cut off from power for a little more than a day.  Pictured below on the left is a shot from Riverwatch Parkway heading to the downtown area of Augusta shows the ice weighting down on the young pines as they bow down to the storm's wrath.  The states of Georgia and South Carolina were greatly hindered in their tree populations with South Carolina with more than ten percent of the tree population lost.  Georgia lost nearly as much, but also some of the the state's more revered trees such as the Eisenhower tree at the 17th hole of the Augusta Nationals Golf Course and numerous magnolias in one of the state's oldest cemeteries, as shown in below to the right. 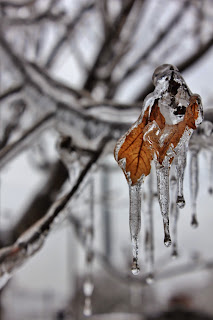 Although Pax brought havoc and destruction to the American South, it also brought a brief but beautiful change to the landscape.  The top image was taken at one of the most iconic structures of downtown Augusta - The Sacred Heart.  The old Jesuit church topped with its silver spires and white marble ornamentation made for a serene sight in the uncommon winter wonderland in the Garden City of Georgia.   Growing up in a place where winter lasts for months at a time, this was a different experience being snow was not present but rather a glassy coating of ice on every inch of the outside world.  I believe I best captured from the aftereffect of Pax were the amber leaves encased by a thick glaze of ice.  Albeit the winter spectacle was shot-lived, Pax beget irreversible damages to the South from natural tribulations, but also the loss of nearly two dozen lives and more than fifteen million dollars in property damages to homes, schools and historic treasures ranging from Texas to Maryland.