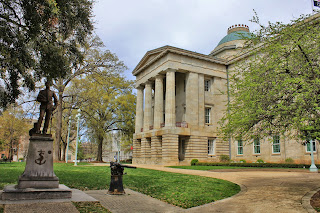 Having visited 17 of the 50 state capitol buildings at this point, each has their unique twist to their stage of the political scene.  Today's statehouse of the Old North State was built in a Greek Revival style giving the building a spartan touch, simple but strong.  Although the structure may seem austere, this edifice holds some uncommon treasures that visitors will not easily find in any of the other 49 counterparts.  To begin the adventure, I entered the capitol's first floor and made my way toward the natural light beaming down from the dome above to find a peculiar statue.  A replica from the original that was housed in the first capitol building in the new city of Raleigh until fire took it's heavy toll, the statue is of our first President - George Washington.  What makes this sculpture especial is that our founding father is depicted as an officer of a Roman legion, from the short cropped and curly hair to the traditional tunic of the era writing on a scroll in Italian!  Venturing up the cantilever staircases to the levels above, the second floor housed the common findings of a legislative center of Senate and House chambers in a simple Colonial design.  Continuing upward to the third floor is where North Carolina hides her jewels of the building.  My favorites, and judging by the response and the amount of questions by the rest of the tour group, were the Library and the Geologist's Office.  Both chambers were heavily influenced by the Gothic style but all in Carolina material and character, the offices hold two forms of the state's history by either pen & paper or by fossilization.  The photo above shows the glassed cases housing various minerals, stones and soils naturally occurring throughout the state while the interior laboratory tables demonstrate how the geologists studied alongside prospectors and agriculturists of yesteryear. 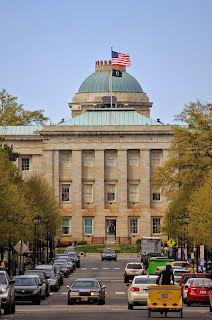 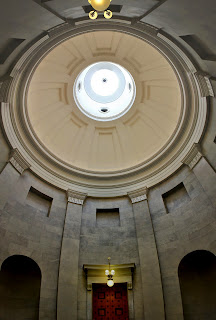 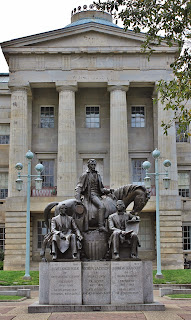 The founding of Raleigh came from the growing concern as the predictable Revolutionary War loomed over the citizens of colonial North Carolina.  New Bern hosted the seat of government from 1766 until growing concerns of attack to the coast put leaders on edge and as westward movement across the territory called for a more adequate capital city.  One might say, the leadership sent men on a wild goose chase across the rolling hills of eastern North Carolina to find a suitable tract to lay out a new city.  Under the persuasion of Colonel Joel Lane and the area being a prime location for such a calling, Wake County was voted to be the political center and by luck and fortune, the spot is nearly in the exact center of the state!  Starting from scratch, the city planners drew up inspiration from the then-capital city of the new nation: Philadelphia.  The cornerstone to the copper-domed capitol was set in place in 1833, two years after the first colonial brick building was consumed by fire in 1831, and was completed in 1840 under the direction of the father-son designers William Nichols and William Nichols Jr among others.  As I wandered the grounds after my tour, I found the Presidents Statue quite intriguing.  Seated are two "confirmed" citizen Presidents born in the Tar Heel State, being James Knox Polk and Andrew Johnson.  Riding proudly atop a horse is none other than Andrew Jackson - Pride of the Carolinas.  Which Carolina that is exactly is still an ongoing friendly yet earnest dispute between the two sister states and I foresee that debate to continue for as long time allows!
Posted by t_mork at 4:03 AM