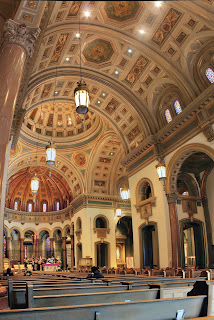 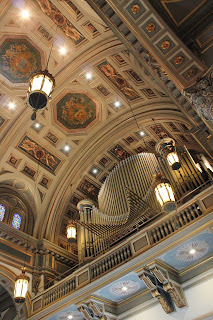 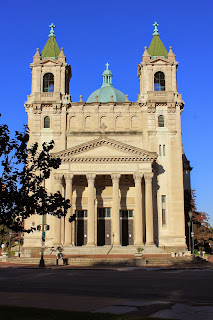 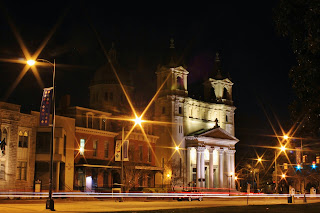 Overlooking the pentagram park named after James Monroe at the edge of the Fan District and the downtown of Richmond, the twin towers of the Sacred Heart rise above the ancient trees of the park below.  This being my third visit to the "Capital of the South", I finally was provided the opportunity to take in the remarkable interior of this Richmond landmark.  Before my departure westward to Charlottesville, I was going to try my luck once more on finding an open door and being it was a Sunday morning, I knew my chances would be high!  I wish I could have stayed for the morning service, but I had a schedule to keep so my stay was brief.  But, I did take the time to sit down in an aft pew and read from the self-guided tour pamphlet and that is when I learned of the cathedral's rich history, in the adjective and monetary sense.  The construction of this grand cathedral was financed by a recent convert to Catholicism and railroad magnate, Thomas Fortune Ryan and his family.  When completed in 1906, the cathedral is believed to be the first cathedral to be built entirely by the funding of a single family in American history.  What peaked my interest was the foundation of the church, more specifically the rare stone that was laid down on the sixth of June, 1903, as the cornerstone.  The stone block chosen to be the first set for Ryan's cathedral originated from the Garden of Gethsemane.  Quarried from the base of the Mount of Olives in Jerusalem and the same ground on which Jesus and the his disciples slept on the eve of the crucifixion.  One of those powerful and surprising pieces of worldly history that can be  right under your feet and you would never know it!