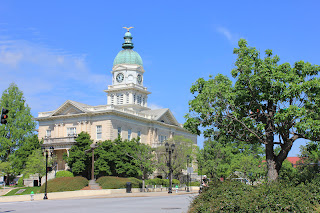 As a surviving structure from the Antebellum era, the City Hall's construction began in 1845 when enough funds had been gathered to build this charming city center.  At the time of construction, this building was not only intended to serve as a municipal building but also a market for local merchants and traders, an auditorium for entertainment, and as a calaboose or more commonly known as a jail.   Standing on a foundation of Lexington granite and built with oolitic limestone bricks same as that of the bricks used to erect the Empire State building and the Pentagon.  Crowning the top of the copper cupola housing a handcrafted four-faced clock is an eagle with a wingspan of eight feet.  Reaching to a height of 99 feet, the city hall watches over Athens from her hilltop position.

For almost a hundred years, the clock was manually operated.  The clock keeper, often a janitor, would have to make the climb up five flights of stairs to wind the weights to keep the clock ticking on time.  Another interesting fact is that the eagle at the top of the cupola was initially intended to be used as a wind vane but due to it's heavy weight it is now just an ornament adorning this classic building.
Posted by t_mork at 7:59 PM