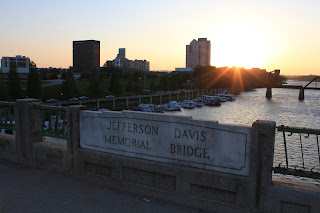 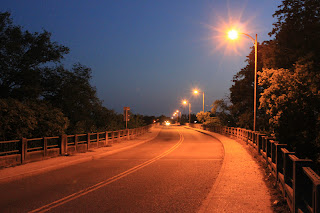 Built in 1931 after the massive flood of 1929 wiped nearly everything out in it's path from the headwaters of the Savannah River in northeastern Georgia.  From a statement made by the Weather Bureau Chief in Augusta on September 26, 1929, "there is no danger whatever in regards to the levee."  due to the threat of the storms from the hurricane approaching from the south.  According to articles of the Augusta Chronicle they all thought that Augusta was too far inland to even worry about the tropical storm could possible bring... They were all wrong.  They forgot to take into consideration the heavy amounts of rainfall that were to come with the storm, which in turn raised the water level of the Savannah to this highest in it's recorded history.  The wrath of the river struck early in the morning on the 28th as the river crested at 46.3 feet in the matter of hours.  For the past decade prior to the flood, the city council had been at a stalemate as to building up the levees and flood dikes alongside the riverbanks, but as the Citizens of Augusta watched from the dikes that held parts of bridges, homes, and whatever else found itself in the swift sweep of the Savannah that day pass by.  It was near the site of the Jefferson Davis Memorial Bridge, known as the 5th Street Bridge today, that the old levee gave out and in turn flooding hundreds of blocks of the downtown, forcing thousands to flee to the higher ground and most of the area out of electricity for most of the power plants were located on the river edge and were either inundated with water or completely destroyed. 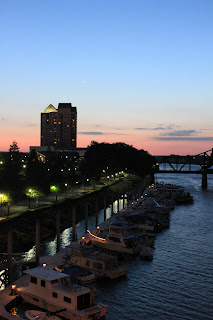 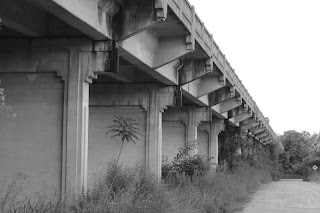 After the dikes had been rebuilt and reinforced, it was time to construct a bridge to suit the increasing traffic across the river, thus the birth of the Jefferson Davis Bridge.  Spanning the river with steel stringers on top of brick and concrete pilings to hopefully withstand the flood waters should they ever return.  Currently the Bridge is eligible for a National Historic Marker but has not been awarded it just yet, but hopefully it will be so it does not fade out of memory of Augusta's History.

View of the boat docks on the Georgia side at sunset from the bridge.
Posted by t_mork at 12:45 AM