Valuing it's small town character, the City of Madison earned the title of being the "Prettiest Small Town in America" in 2001 by Holiday Travel and is one of the largest historic districts in the state of Georgia with well over a hundred Antebellum homes.  With recent restoration of the Antebellum homes which are said to be spared from Sherman's March to the Sea because of the favor of the local resident and former Senator Joshua Hill.  He and General Sherman's brother had both attended West Point and with Hill's Unionist views, the city was left in peace.

Surviving the turmoils of the American Civil War, but falling victim to the Fire of 1869 left most of the wood framed structures razed to the ground.  Rebuilding of the downtown area with the classic red brick and local stone lead to the increase of commercial and staple trade with the growth of the railroads.  Today, most of revenue of the downtown is brought in by the large number of tourists that are attracted to the local venue, such as myself!  Any visitor can find a shop or restaurant to satisfy there leisure adventure to Madison, mine just happened to be at Scoops ice cream shop!  Pay them a quick visit if you ever find yourself in the county seat of Madison! 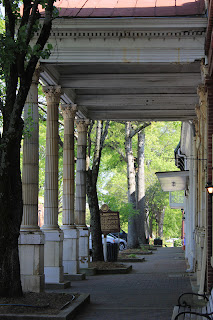 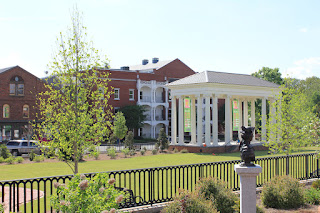 Famed for it's Classical and Victorian homes from the Antebellum Era of the South, Madison is a in the heart of the Mansions of the South along with numerous other beautiful landmarks of Georgia!