Tucked away just off of Interstate 20 between Atlanta and Augusta, this little rustic town of 572 residents along the Antebellum Trail of Georgia is home to serene natural beauty and intriguing Southern history! 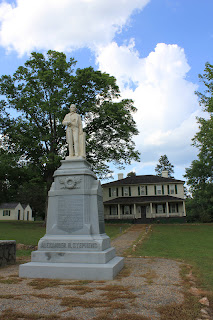 - Zealous and Fiery Politician -
Making numerous marks within Georgian History, this served first as a Representative, then in the Senate, from there served as the Vice President of the Confederate States!  After being arrested in his home, behind his statue pictured to the right, after the collapse of the Confederacy and taken to Boston Harbor for about five months at Fort Warren.  Upon his release and return to Georgia, he did not waste time before getting involved in politics in the Reconstruction Era.  Many of his political maneuvers changed the history of this Nation in more than one way, fighting, despite his small size and stature, for what he believed up to the day he passed serving as the 50th Governor of the state of Georgia in 1883.  Author of two books that I hope to get my hands on someday, The Constitutional View of the Late War between the States and The History of the United States from 1871 to 1883, especially the latter to see the take on American History from the Vice President of the Confederate States of America!
Posted by t_mork at 9:08 PM