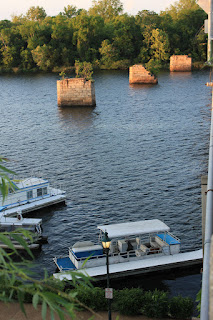 Lasting remnants to the old South Carolina Canal and Railroad Company and one of the only pieces of evidence to the once upon a time Hamburg, South Carolina.  Spanning across the state from what is now Augusta, Georgia, to Charleston, South Carolina, this railroad was the longest single stretch of railway in the world at the time it began running agricultural produce and travelers in 1833 up until the outbreak of the American Civil war.  Part from being the longest span of rail, this track also used the modern pattern which railways still use to this day enabling multiple trains to make stops such as Columbia, Aiken, and many others without holding up passing locomotives.