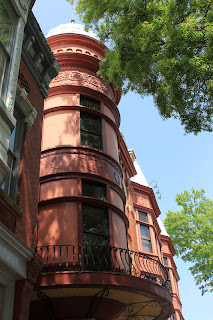 Crowning the shops of Robert Toombs avenue with a vibrant array of colors giving life to the quaint town of Washington, Georgia.

One of the turrets of the grand hotel, The Fritzpatrick.  Named after one of the great families of  Wilkes County, the Fritzpatricks, the hotel has often been referred to as the Jewel of Washington throughout it's lifetime in the Heart of the Downtown.

Common site of small towns throughout the Southern States are the Greek and Classical  revival homes such as this one here.  Some of these homes have been the set for some of America's famed films like Gone with the Wind, which was filmed a little over a hundred miles from where this edifice stands.
Posted by t_mork at 1:40 PM