Every which way you turn in the District, there will be a either a bright white marble or granite monolith or stern bronze sculpture where ever you go!  Often dedicated to a heroic American or sometimes an international figure, a depiction or symbol of a department or cabinet building, or just a simple expression through art make up these grand monuments.  This is where wandering aimlessly gets me into trouble because I find these spots and take a few pictures and go to the next "shiny object".  I had to do my fair share of research to track down these but I did it out of sheer luck of marking most of them down on a pamphlet map I had with me!  The first piece in this post is a pacifying piece of art in the John Marshall Place park right off of Pennsylvania Avenue by Capitol Hill.  Simply two elderly gentlemen forever sitting under the boughs of the trees playing a game of chess is what a passerby will find on the northern side of this park.  Continuing west through that park, I ran into the District of Columbia Court of Appeals building where our 16th President stands looking onward to the dome of the Capitol.  Back on Pennsylvania Avenue stand two gigantic statues named Man controlling Trade in front of the Apex building which houses the Federal Trade Commission.  I admired these statues from my first visit and still smile in awe everytime that pass by them! 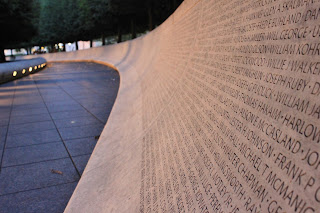 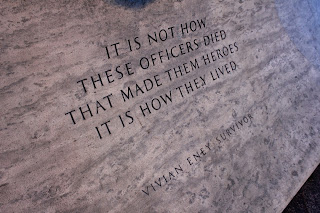 It was a hard choice for me to pick these pictures of either the memorial wall or of the lions perched on the ends of the wall.  In the end, the names and dedication won me over, although the lions and their cubs are a depiction of the adult lions standing the watch over their young, symbolizing the role of the Officers of the Peace across all fifty states.  These marble walls have more that 17,000 names of fallen officers within the line of duty and every May, more are added to this hallowed memorial in Judiciary Square during National Police Week. 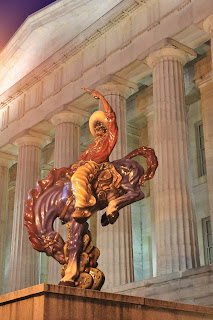 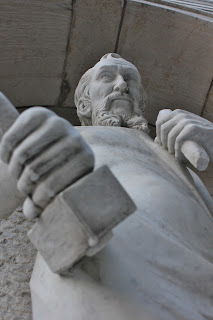 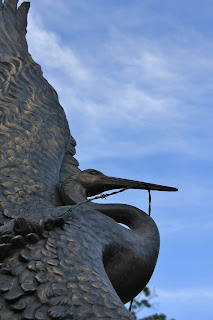 Adding a slash of color to the Doric facade of the Smithsonian American Art Museum is the sculpture by Luis Jimenez, Jr. of the cowboy and the bucking horse.  As one of four statues making up the facade of Casa Italiana 595 1/2 Third Street Northwest, the one that I admired the most was of Michelangelo.  To see the Father of the Renaissance and Sculptor of the David carved by one of the modern era's most dignified scupltors, Carlo Nicoli, was quite a sight!  Last but not least is the bronze sculpture of the two opposing cranes crafted by Nina Amaku.  Symbolizing unity and balance that is required to overcome outside and inner battles and restrictions, the cranes wrapped in barbed wire stand as an international message to overcoming ignorance and intolerance through unification and understanding of each other as humans as one but still appreciating our cultural differences.
Posted by t_mork at 2:13 AM