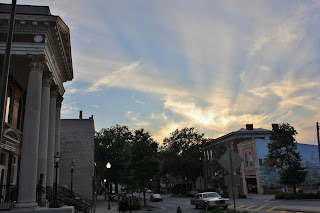 Once Georgia's Antebellum capital city and quite possibly the most complete Federal period city left in existence in North America, Milledgeville is rated at the top of my favorite places in Georgia!  Named in honor of one of the most notable founding fathers and governors of Georgia, John Milledge, this city was chosen for it's central location and at the fall line of the Oconee River.  Even today, it is still evident that Milledgeville was a prospering central hub of the South.  Given that the area was a crossroads for many of the local Native American tribes and frontiersmen, fertile and arable lands making it prime cotton country with river access, and a political and industrial hot spot, it is easy to see how the city's slogan is "Capitals, Columns, and Culture"!

Serving as the Capitol of Georgia from 1804 to 1868, the fall to Milledgeville came on the 23rd of November as General Sherman reached the city and reeked havoc on the capitol of then the Republic of Georgia.
Saint Stephen's Episcopal Church is one of the more well known relics to survive the March to the Sea - barely.  Targeted by the Union troops mainly due to the secessionism strongly believed by the Southern Episcopalians, this Gothic Carpenter style church was used as a stable for the Union troops' horses and the pews were used as fire wood for the one night stay.  The most damage to this piece of Milledgeville/s history came as the arsenal and armory nearby were lit up by the departing troops resulting in the roof being blown off the top of the church.  Rebuilt like many other buildings following the end of the War, Saint Stephen's still serves the Milledgeville community to this day. 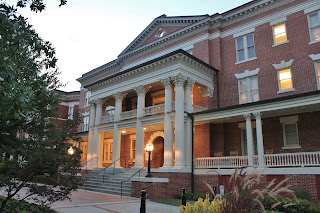 The signs of wealth and quite possibly big families are every which way you turn on the streets of Milledgeville.  At this point, I was really thankful for digital photography and my 16 gigabyte memory card because there was beautiful homes of a wide array of styles all thoughout the old capitol city!  Governor John Milledge was not only a American Revolution veteran, Georgia Governor, Attorney General, Senator and Representative, he was an advocate for higher education.  Thus he used his own money to finance the University of Georgia and basically founded the City of Athens in honor of Plato, but also influenced the numerous schools and colleges of Milledgeville.   I would like to know what the mansion per capita ratio is for this city is!