Columns of the Capitol - Washington, District of Columbia

I think on my next tour of the Capitol Building, one of my first questions for the unsuspecting intern will be "How many columns are in the entire edifice of the Capitol?"  If they do not know, they have a long task of counting ahead of them (or some serious research being I couldn't find it!)  Although I did learn some of the historical significance of some of the columns within the colums throughout my two tours so far.  In the corridors leading to the Old Supreme Court chamber are sandstone columns that are remnants to the early construction of the Capitol.  One of the unique features to these columns are their capitals that are adorned with corn, a representation of the new American by one of her native plants that also plays a crucial role in American agriculture.  Another one as seen in the third image are the pock marks from musket balls.  These scars are marks left behind from the invading British forces when they marched on and burned Capitol Hill.  Continuing on to some of the most fundamental columns of the entire building - The Crypt.  These stout pillars hold up one of the most magnificent rooms of the entire Capitol, the Rotunda.  Being strained by the weight of a dome made up of more than 4,000 tons of cast iron and more than half a million pounds of sandstone and marble. 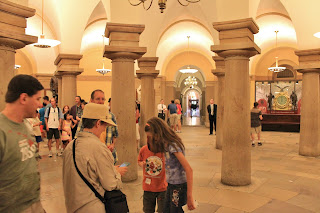 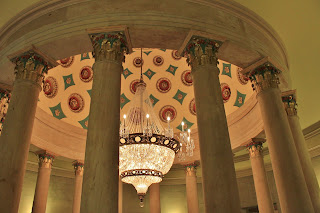