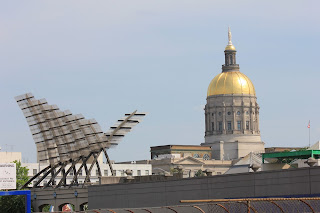 Following the Reconstruction Era, the question once again came to the State of Georgia about it's seat of government: Return to Milledgeville or plant new roots in the prospering city of Atlanta?  Calling upon the citizens of Georgia, the vote tallied up with two-thirds in favor of Atlanta as the new home to the statehouse in December of 1877.  One of the four stipulations placed by the state legislature were executed and those were "the cost of construction should not exceed one million dollars".  The rest were "completed by January 1, 1889" which was only overstretched until March 20, 1889, "built of Georgia material" but after realizing the quarries of the state were not adequate, and "built by the terms of the board of commissioners" which I will spare you those details!  Interesting enough, the remaining amount of that $1,000,000 was a mere $118.40 - talk about cutting it close!   Built with a combination of Renaissance and Classical Revival styles, the new legislative hall crown a small rise which overlooked the growing industrial city of Atlanta at the time with her bright golden dome but now accents the forefront of the jungle of skyscrapers.  Under the Dome in the rotunda are portraits of Washington, Jefferson, Franklin, Oglethorpe and Lafayette, which are the only artifacts in this capitol remaining from the old capitol in Milledgeville.  Looking westward atop the cupola is Miss Freedom, carved out of Georgia marble, same as the cornerstone that marked the beginning of the construction.