The Rotunda - Washington, District of Columbia 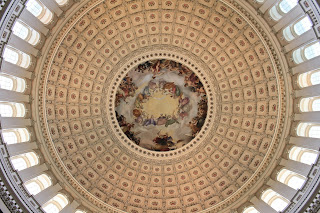 Just a size for thought on the Rotunda, if the Statue of Liberty lowered her arm, she could stand atop her pedestal and still not hit her head on the top of the Rotunda!  Everything you see in these three images is part of the new addition to the Dome.  In middle of the 19th Century, Congress approved the rebuilding of the Dome at the cost of a little over a million dollars by the completion in 1866.  The new addition was followed by the "wedding cake" design of the Fourth Architect of the Capitol, Thomas Ustick Walter.  Following similar contruction techniques as the first, the dome is still of a cast iron structure, but with the wise direction of his German born Chief Assistant, August Schoenborn, and his keen use of cantilevers and arch ribs that greatly expanded the size of the Dome while still maintaining the structural intergity.

Moving onto the grand fresco, the Apotheosis of Washington.  Painted by one of the most notable painters within the Capitol's artwork, Constantino Brumidi.  He completed this massive project the same year that the American Civil War came to an end - 1865.  Painted in great detail for up close viewing but also a few hundred feet away at the floor level, an average size of the figures in the painting are about 15 feet, if that says anyting about how large this fresco is!  As a final product, it is easy to see the influences from many on the great domes and paintings of the world to include the Pantheon in both Rome and Paris, Saint Peter's Basilica, and Saint Paul's of London all in the Dome of our Capitol. 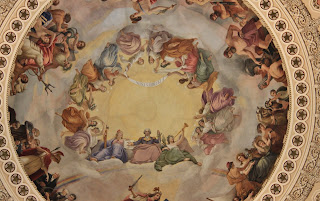 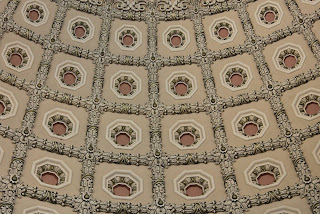