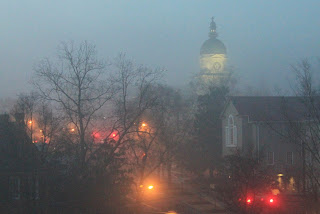 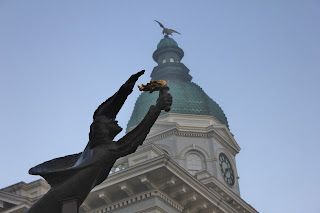 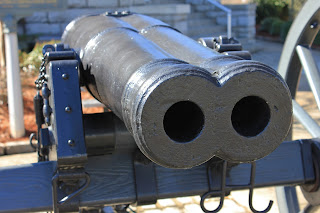 The start of the daily adventure in Athens was somewhat foggy, but made for a unique morning shot while the city lights gave a glowing halo through the heavy air.  As the day went on, the sun shone down on the centerpiece structure of Athens, her city hall and one of the most treasured possessions of history to the city, the Double Barreled Cannon.  Although this double six-pounder never saw wartime action, the trials were described as a success by it's builder John Gilleland, a local dentist, mechanic and builder (quite the handy-man!) after three trials.  Despite those trials being described by viewers as a total failure, such as the first trial "spinning off-center... plowing up an acre of ground, tore up a cornfield" until the chain linking the two balls together broke and then the two projectiles went off in two very different directions.  The third and final trial of the cannon is the one that made my chuckle about when I read the description of the event.  The trial began with the linking chain breaking immediately after the powder had burst the projectiles out of the barrels, one ball tore through a cabin near by and destroyed the chimney while the other ball flung off killing instantly a bystanding cow.  Gilleland still described these a success, which further cements my utterance "...and that is why the South lost the War."  The cannon was born and raised in Athens as it was cast in 1863 in the Athens Foundry and Machine Works at a production cost of $350, probably Confederate dollars.  This is one of the few single cast double barreled cannons remaining in the world and is remarked as one of the best preserved pieces.
Posted by t_mork at 10:48 PM