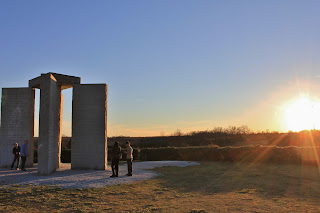 Located in rural northwestern Georgia atop the highest point in Elbert County, the Georgia Guidestones are shrouded with enigma and conspiracy theories by some while others agree with the creators' vision as the guidesstones to the Age of Reason.  The mystery of these stones began from the very beginning as the main man behind the design and funding of the Guidestones has remained anonymous since Elberton Granite Finishing Company received the first draft of plans.  The creator has used the pseudonym of R.C. Christian which has also led conspiracists to believe that these massive slabs of granite are part of a secret social order or "devil worhip" as a local minister at the unveiling termed it.  Nonetheless, these stones are more than mere "guides" written in eight of the world's modern languages, they are also contain remarkably accurate astronomical features within the center stone.
The capstone inscription written in four of the world's great ancient languages - Babylonian cuneiform, Egyptian hieroglyphics, Classical Greek, and Sanskrit.  The inscription translates as "Let these be the guidestones to the Age of Reason."  Where the conspiracy theories stem from are from the engravings on the four large "guidestones".  Written in English, Spanish, Russian, Chinese, Hindi, Swahili, Arabic and Hebrew, which are all the more prominent modern languages spoken throughout the world today.  The message of the guidestones reads as follows:
"Maintain humanity under 500,000,000 in perpetual balance with nature.
Guide reproduction wisely — improving fitness and diversity.
Unite humanity with a living new language.
Rule passion — faith — tradition — and all things with tempered reason.
Protect people and nations with fair laws and just courts.
Let all nations rule internally resolving external disputes in a world court.
Avoid petty laws and useless officials.
Balance personal rights with social duties.
Prize truth — beauty — love — seeking harmony with the infinite.
Be not a cancer on the earth — Leave room for nature — Leave room for nature."

With the strong meaning behind this somewhat secular message within what I like to term as the "buckle of the Bible Belt", I understand where the mystery and obscurity behind this 'American Stonehenge' comes from!  Being a polyglot myself, I truly appreciate this place not only for it's beautiful rural setting near the Granite Capital of the World (Elberton), but also for the worldly sensation that these stones bring from their engravings.  Centered above is the Arabic word in the noun form for "love" (al-Hub) and I think it had to do with the timing of the sun setting which enhanced the golden color and the crisp shadows on this powerful word that caught my eye.  Another eye catcher was the graffiti in the equinox axis "freedom" just at the exact point with the setting sun made for an amazing shot!  This place is a true Hidden Treasure of Georgia! 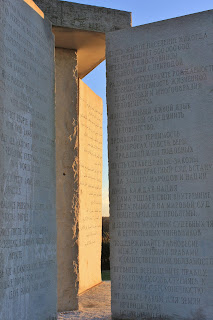 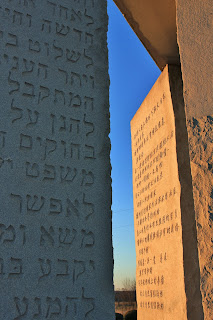 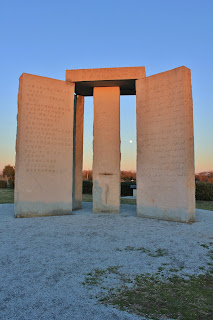