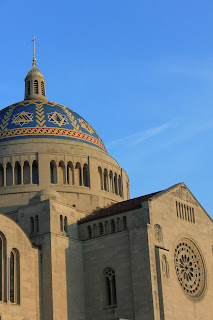 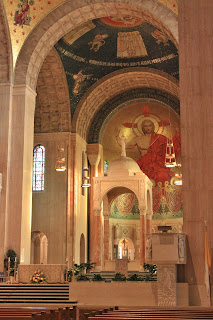 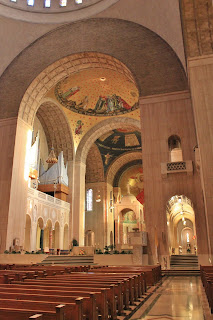 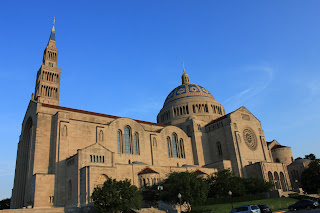 The Shrine is the largest Catholic church in the United States and is the tallest habitable structure in Washington, D.C. and is one of the most visited places of worship of the District.  The Shrine's clean and simple appearance comes from its Romanesque roots while the embellished interior and dome are Byzantine in design.  The Chief Architect of the Shrine was Ireland-born and Boston resident Charles Donagh Maginnis - and I think we can remove any doubt about what denomination he was!  When drawing the designs, Maginnis had the aim of building a "distinctively American" Shrine to the Blessed Mary and not be directly influenced by Old World structures such as Saint Peters of Rome or Saint Marks in Venice.  One amazing fact I learned about the Basilica is that only stone, brick, tile and mortar were used to build this grand Catholic temple much like the medieval cathedrals and without any iron beams or frames despite the constrution beginning in 1920.   Pope John Paul II named and blessed the Shrine as the 35th Minor Basilica of the United States, giving her the full title of the Basilica of the National Shrine of the Immaculate Conception and earning the nickname of America's Catholic Church. 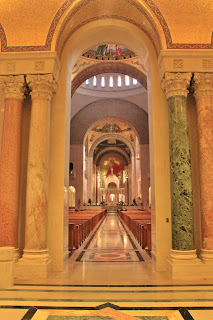 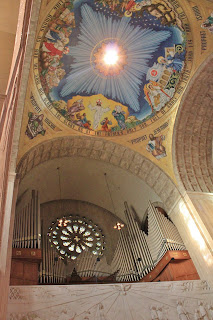 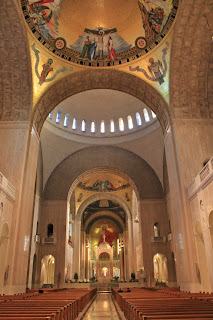 I happened to be "convienently lost" (as I like to call it) when the 329 foot tall tower grabbed my attention while I was driving around after my morning photo shoot at the National Cathedral.  After spending about four hours under the gold-gilded groin vaults, I decided that I needed to get some sleep being I had been running on only a few hours of sleep!
Posted by t_mork at 4:33 AM